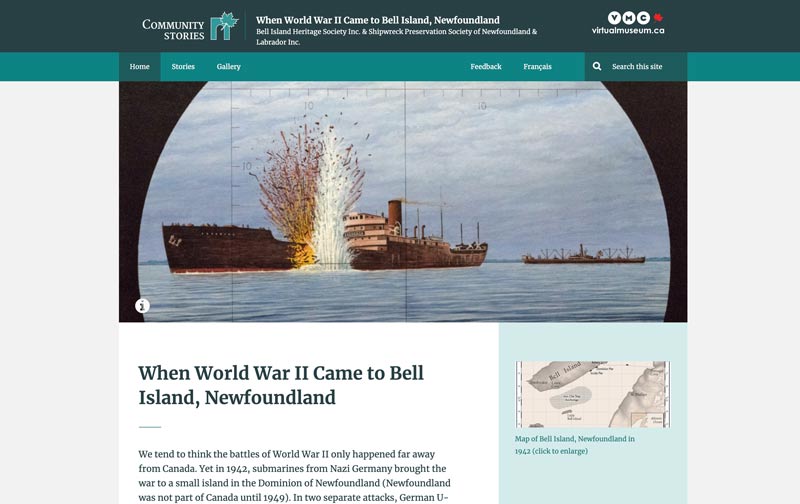 An excellent free online resource has just been launched to help people learn more about the historical Bell Island shipwrecks, off the coast of Newfoundland, Canada.

Virtual Museum of Canada is the largest digital source of stories and experiences shared by Canada’s museums and heritage organizations. Working with the Bell Island Heritage Society, and the Shipwreck Preservation Society of Newfoundland & Labrador, the online museum is an in-depth look at the history of Bell Island in WWII, the U-Boat attack on the iron ore vessels, and the underwater exploration that continued to tell the story of Newfoundland. The virtual museum includes historical images, underwater images from Jill Heinerth, and video content.

We tend to think the battles of World War II only happened far away from Canada. Yet in 1942, submarines from Nazi Germany brought the war to a small island in the Dominion of Newfoundland (Newfoundland was not part of Canada until 1949). In two separate attacks, German U-boats sank four Allied merchant ships and killed 65 sailors from around the world. Newfoundlanders were shocked by the savage attacks right on their doorstep. Despite the shock, Bell Islanders immediately responded by rescuing and caring for the survivors of the sinkings.

The U-boat attacks had a lasting impact on Bell Islanders, especially in Lance Cove, closest to where the ships were torpedoed. Graves of the dead seamen, a memorial to their sacrifice and two rusting coastal guns are physical reminders today. The four shipwrecks on the seafloor now draw scuba divers from all parts of the world to Newfoundland, to explore their mysteries and beauty. Eyewitnesses to the attacks have passed their stories down to their children and grandchildren.

Click to explore the Virtual Museum of Bell Island…

Planning a dive vacation this winter? Be prepared for tackling some inevitable delays… By Fly & Sea  Some of us love to get away in the winter, heading to …

Discovering The Art of Zen In Cyprus

The gargantuan wreck of cargo ship Zenobia is regarded as one of the world’s best dives, but it doesn’t come without its hazards Words and Photography by Tobias Friedrich The …

By Michael Menduno One of the world’s most iconic shipwrecks, the wreck of the SS Andrea Doria—located 110 nautical miles (200km) east of Montauk, New York and dubbed the …