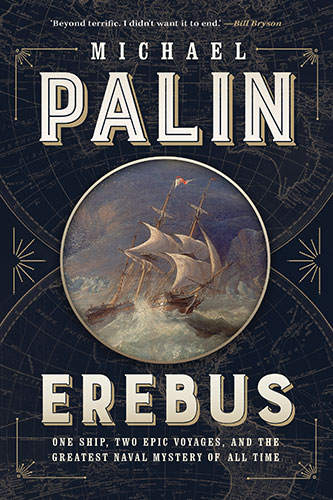 Joe: At the end of your book you make reference for your desire to scuba dive on Erebus. Do you dive?

Michael Palin: I do, yes. I am not hugely experienced but I learned to dive on one of my trips around the world, in the Philippines. I love diving and I wouldn’t make a fool of myself. Although I would be worried about putting my foot in the wrong place on Erebus and destroying 170 years of history.

What sparked your interest in writing a book about Erebus?

I was doing some research on Joseph Hooker, the great botanist of the Victorian period, and I found out that he had signed on as an assistant surgeon, at the age of 22, on the ship called HMS Erebus which I knew nothing about. I was just amazed, the more I read it the more fascinated I became by the fact that Erebus had travelled so far in such difficult waters, just under sail, and had achieved so much. The first to identify and confirm that there was an Antarctic continent, that in itself was a huge achievement. And then to discover the ice wall which later is named the Ross Ice Shelf, in addition to carrying out scientific studies in magnetism, oceanography, botany, and ornithology. It also discovered the volcanoes on Ross Island and charted Antarctic coastline. So the more I read, the more I thought that this is a story that I don’t know and I’m British and it’s a British ship, it’s not part of the history that I’ve ever learnt. And then to find that she was chosen to be the flagship of the Franklin expedition, which was the complete opposite to a success, it was a total disaster. I thought that there is a story here, there is a narrative, the ship itself is the story. And then I decided to go ahead and write this book when I heard that Erebus had been discovered in September 2014, as I thought that the ship is still there, it can still be touched if you are lucky.

One of the things that I found interesting in your book is how you point out the differences in which the officers and crew saw the two polar expeditions through their letters.

Well, the officer’s letters that I have seen are official as they are to be read by the Admiralty afterwards. They follow a formal path describing what they have seen, what is going on, and what the weather is.  The letters written by the crew, there are fewer of them for a start, and they much less well written as these are people without much education, but what you draw from them is much more detail and much more unguarded statements as to what lies ahead. There is a letter from Stromness which I quote when they are heading off for Greenland and the officers are all saying that we are all fine and we will see you in Hawaii in a year’s time. And there is one letter from a carpenter on HMS Terror to his wife that states this is a dangerous voyage and we may not make it, take care of our children. It is a very moving letter, it shows that the crew really had the instinct to what was going on. The crew show doubts and fears which the officers – as leaders – try not to show because that is their position; they are in control, they are the ones in charge of it; it’s got to be seen as going well.

What sets your book on Erebus apart from the others?

Erebus: One Ship, Two Epic Voyages, and the Greatest Naval Mystery of All Time

Most divers won’t descend below 130 feet (40m) though diving deeper is very appealing to many of us, myself included. It opens up new territory: deeper wrecks, caves, …