There’s nothing like a big critter dive to get the adrenaline pumping – even before you hit the water. The sailfish and sardines off Mexico’s Isla Mujeres is one for the logbook!

Text and Photography by Jesse Cancelmo 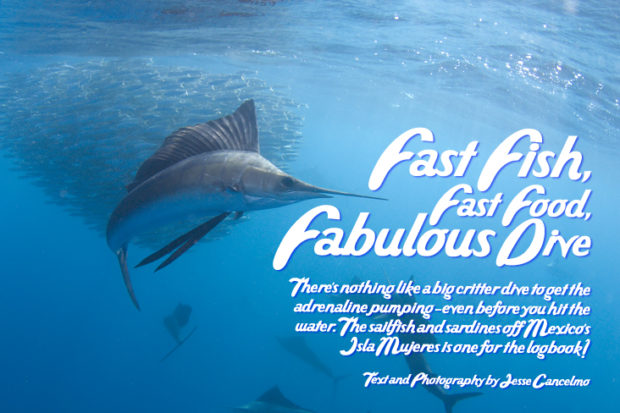 The bait ball was under attack and as I surged through sun-shot water the hunters sailed past at arm’s length like a deadly flight of arrows.

The predators streaking by were Atlantic sailfish. Their prey: sardines, a migration of millions. Easy targets in a bright blue kill zone.

Streaming bubbles from their fearsome spears, the sleek ‘sails’ quickly and efficiently corralled their quarry. Reacting, the sardines contracted their silvery spheres, a survival illusion of the small to combat the large, with little effect on the outcome.

Motor drive whirring, I finned hard to stay close to the action, recording the onslaught. The repeated attacks were a marvel of lethal efficiency. The multitude of sardines no match, like so much battlefield fodder. Their numbers diminished – rapidly – before my eyes.

This yearly spectacle plays out north of Isla Mujeres in the plankton-rich waters of Mexico’s Yucatan, a quick boat ride from the holiday splendors of Cancun. From mid-January to mid-March it’s the frigate birds holding overhead that direct boats to the bait balls, the big fighting fish and the marine melee they produce.

With its prey herded tightly together, the sailfish get down to serious business using their bills to strike and stun. The rapid bite and gulp action that follows leaves plenty of sardine bits in the warm shallows, tasty snacks for the frigate birds and other freeloaders.

In my years of exploration and underwater photography I haven’t witnessed predator-prey behavior quite as remarkable as this food chain fray off Isla Mujeres.

I did think twice before jumping in the water with an excited pack of spear-wielding game fish. The power and potential of a speeding sailfish bill cannot be underestimated. It states the obvious to say that such a long pointed weapon has evolved to stab, to impale, to inflict grievous harm.

Observing these agile animals repeatedly slap and immobilize small, fast moving fish inspires awe and commands respect. As dozens of the big fish darted around us in the feeding frenzy, it was evident their big eyes were taking everything in. Sailfish can turn, accelerate and stop on a dime. Their precision is astounding. They always manage to change direction – whew! – just as you accept becoming a shish kebab. Though I can’t say I ever felt directly threatened I did find myself backpedaling from a bait ball on more than one occasion when the action became a little too frenetic and crowded. We were in skin diving gear on these photographic forays because of our own need to move quickly.

At almost twice the speed of a barracuda, sailfish (Istiophorus platypterus) are the fastest fish in the ocean, known to reach speeds of almost 70mph (110kph). They’ve been clocked at 68mph, faster than bluefin tuna, wahoo and swordfish. A California sea lion tops out at about 25mph (40kph) and easily the fastest swimmer on our boat, a former lifeguard, was clocked at 5mph (8.3kph) using his one-metre long free diving fins. 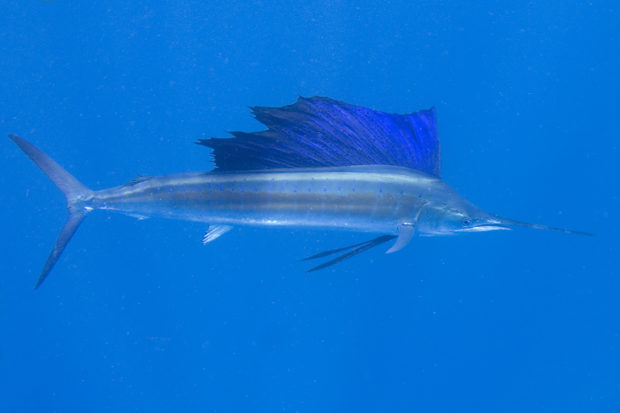 Sailfish are capable of extreme bursts of speed. Combine this with their maneuverability and you have a formidable hunter. Pelvic fins contract into body grooves minimizing drag. Forked tails feature double keels and notches on the upper and lower surfaces that function as hydrofoils. As the name suggests, the Atlantic sailfish has a spectacular fan-like, blue and purple dorsal fin that runs nearly the full length of the body, though it’s often folded when they swim. When threatened or excited, however, the fish hoists this dorsal fin or ‘sail’ to look bigger and more formidable. The raised sail is also thought by some marine biologists to be a cooling system for the animal. The sails were used to full advantage herding the sardines as the accompanying photos indicate.

Their bills protrude from the upper jaw and typically measure about twice the length of the lower jaw.

Laterally, the top of the body is blue, the mid section brownish and the underside white and silver. Light blue dots make up a series of about 20 parallel stripes on either side of the body that crosscut the colours running from head to tail. A sailfish uses its pigment cells or chromatophores to flash or light up its body colouration depending on the situation and its level of excitement.

In the western Atlantic, sailfish range from Maine to Argentina. They tend to stay in warm waters but migrate to the northern and southern extremes of their range during summer months. Sailfish abound in the Gulf of Mexico, the Caribbean and the coastal waters off the east coast of Florida. The sardines migrate from the coastal waters of South America to feed in the plankton-rich shallows atop this stretch of Mexico’s continental shelf.

In addition to sardines, sailfish feed on mackerel, needlefish, tuna and squid. For their jumping and surface acrobatics, sails are prized game fish although their tough meat is not so palatable. Fortunately, most sailfish being caught by rod and reel are released.

Mark Strickland and I accompanied Doug Perrine on this special charter aboard the 42-foot (13m) Keen M out of Isla Mujeres. Captain Anthony Mendillo managed to find bait balls and sailfish on each of our six-days, which came at the end of the season. Evidently, we hit the sweet spot. In previous weeks there had been sailfish action but sometimes the bait balls were elusive. One day our captain trolled for sailfish using hookless lures or teasers. This ballyhoo bait was very effective drawing the sailfish up to the boat’s transom. The captain would then shout for one of us to jump in while his mate showered the water with live bait. Though effective in a limited way, allowing us to get a few shots of a couple or more sails, the trolling was still a distant second to bait ball action.

This spectacle of nature off Isla Mujeres that brings together the birds, the bait and the hunters, is a thrill like no other. Most of the time our eyes were wide, our jaws were dropped and adrenaline was pumping furiously. Hands down, this diving experience was on my hit parade, easily in the top ten.

Time of Year: Mid-January through mid-March.

Accommodations: Numerous hotels on Isla Mujeres just a Google away. Stay in town and rent golf cart to shuttle people and gear between your hotel and dock.

Diver/Snorkeler Equipment And Tips: Bring light wetsuit to 3 mm and a bright coloured cap or hood. Mostly surface snorkeling but some opt for 40 cubic-foot pony bottles available on boat. Bring an extra snorkel. Bring a windbreaker or sweats for the boat between jumps.

Getting the BIG Picture

Wall diving in the Cayman Islands is extraordinary, even before you hit the water Text by Peter Golding   There’s a wall dive you won’t want to miss next …

The University of British Columbia’s Project Seahorse just announced a rare documented sighting of a seahorse in Canadian waters. The sighting comes to light as a result of iSeahorse.org, the new … 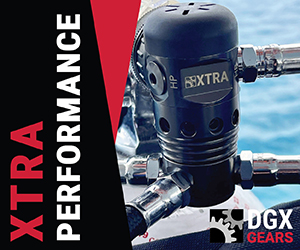 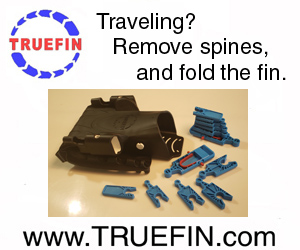