Words and Photography by Jan Morton and Chris Straub

Gorgeous tropical reef dives are fine and dandy, but sometimes you just want to sink your teeth into a wreck…

In 2014, through a combination of wanderlust and happenstance, Jan Morton found himself on Siquijor Island and fell in love with this Phillipines island paradise. Siquijor had been missed by the tourism boom, possibly due to its reputation of being a mystical Island. Siquijor’s many dive sites were simply devoid of divers. The few divers who did visit were blessed with stunning dives all to themselves.

Jan established a small dive shop beside a beach in the town of Maite, San Juan, Siquijor. The shop, Siquijor Divers, is geared primarily towards avid divers whose demand is for quality service, uncompromised safety, education, and dives outside the typical recreational boundaries. In 2018, Canadian diver Chris Straub made the decision to join Jan and form a team with the passion to explore, discover, and document the local area. With many years of experience diving the wrecks of the Bahamas, British Columbia, and elsewhere, there was only one thing missing for Chris and Jan in Siquijor waters: a decent shipwreck to dive.

Then in August of last year during a conversation at the dive shop, a staff member named Wilmar mentioned a local wreck: a big passenger vessel that had been dived maybe once or twice but was too deep and had too many sharks. Wilmar had heard that someone dived it years ago to salvage the prop and shaft, but that’s about all he knew.

Chris and Jan were all ears. A deep wreck—with sharks! It sounded like a tech and wreck diver’s dream. But while it was a lead, they had no location and no name. What they had was a search.

After some time spent on their computers, Jan and Chris learned that the wreck in question was a 195 foot (60m)-long George Peter Lines passenger ship named MV Geopeter.  It had been intentionally grounded in 1987 with 350 passengers on board, after a large fire threatened the lives of all aboard during a voyage. Once passengers and crew had been safely evacuated, the boat was stripped of valuable equipment and towed out to deeper waters to be sent to its final resting place on a sandy bottom at approximately 200 feet (60m).

Once they had come up with the name of the vessel and an approximate location, Jan contacted a friend and longtime Siquijor diver who, as it turns out, had skirted the top of the MV Geopeter back in 2002 with a group. The group had kept their dive at a max recreational depth of 130 feet (40m), but it was their opinion that this was a wreck that was very much worth exploring for those with the proper training and equipment.

After a few days of planning, weather-watching and preparing their equipment, the pair set off with a small crew to the island of Silinog. Silinog is a quintessential tropical island, with turquoise waters and white sand beaches surrounding an island that is home to a wonderful community of fishermen and artisans. With protected waters and a monthly fishing ban in place during the new moon, it’s home to an impressive variety and quantity of marine life.

The team arrived at the island to a warm welcome. Several local fishermen, government officials, joined the boat to assist in the search of the wreck’s location and monitor the dives. Despite the fact that the team had arrived during a three-day fishing and diving ban during the new moon, the local community recognized the potential importance of the new dive site for tourism and granted permission for the team to dive. The locals knew the wreck was there, but nobody had even tried to locate it since 2007, when a team of divers had tried to salvage the prop and shaft. With a general idea, a Lowrance scanner and a prayer, the group set off for the first day of the adventure. By five o’clock in the afternoon and three CCR dives behind them, the track on the Lowrance resembled a plate of spaghetti—but still no wreck.

The next morning they awoke to news that another local, the one who had guided the salvage crew in 2007, would be joining them for the day and would assist in finding the wreck. One hour later the looming signature formed on the screen of the Lowrance. It was time to dive.

Two of the crew donned their gear and went down to 130 feet (40m) on open circuit to evaluate the conditions and to secure a line to the conning tower. Everything was perfect, with 65-foot (20m) visibility, no current, and (unfortunately for Jan and Chris) no sharks.

Chris and Jan began their descent with the planned bottom time of 45 minutes. The goal was to circle the wreck and evaluate the structure for any danger/interesting items, seek potential entry and egress points, and establish a more permanent mooring attachment location. Within that 45 minutes their excitement was proven justified. There was a real wreck, teaming with life, and it had amazing potential for technical wreck divers.

Their first stop after securing extra bailout bottles on the bow was to head to the bottom to get a good idea of the size of the wreck, as the darkness of the depth limited the view to approximately one quarter of the ship. At 190 feet (58m) the bow stood above them proudly.

After adjusting cameras, gear, and doing cell checks, they set off down the starboard side of the vessel towards the stern, fully expecting to see that the propeller had been salvaged, as was the story from several locals. As they traveled down the length it became apparent that the upper decks had collapsed onto themselves, including the bridge. This was probably due to the heat of the fire, coupled with the age of the wreck, compounded by storms over the intervening 32 years. They arrived at the stern, however, to find the large propeller still attached without any evidence of an attempted salvage.

Clean as a whistle

A wreck is obviously an important breeding ground and protective environment for many species of marine life. The fact that this one wasn’t covered in nets and fishing line demonstrates that the locals respect it for this role and harvest their catch elsewhere.

The interior of the wreck was surprisingly clear of obstacles and danger issues. With no hanging wires and no fallen debris, it was a true pleasure to behold. The crew who cleaned the ship prior to its sinking did an admirable job! The site was a wreck diver’s dream, in a dream area, protected during monthly fishing and diving bans.

Back on the boat after 45 minutes of decompression, cameras full of pictures, Jan and Chris reported to the waiting crew. Jan effused, “The wreck almost looks prepared for diving. None of the obstacles you would expect to be in the way of exploring this amazing vessel.”

With the exterior of the wreck checked for dangers and access & egress points, Jan and Chris decided that on their second dive they would penetrate the ship, entering at the cargo/chain holds on the bow and exiting at the starboard midship. To their surprise, there was a lone spare anchor still resting against the wall of the hold, now a home to coral and marine life. 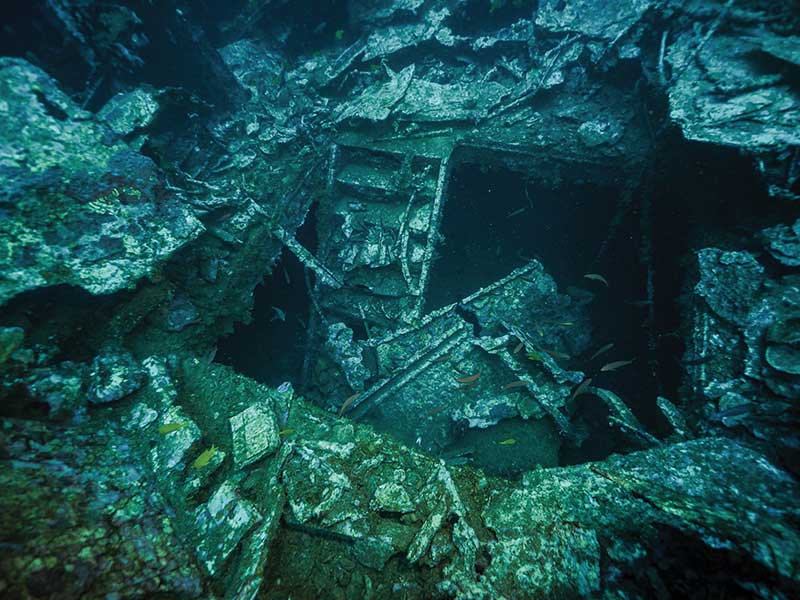 The MV Geopeter on Silinog (Selinog) is a 20-mile (33km) speedboat ride from Maite, San Juan on Siquijor Island. The wreck lies perfectly upright in 60m (200ft) of water. The port side anchor chain still points towards the beach where the ship burnt for five days before being hauled back out the sea. This is a technical dive only, definitely possible on air, with deco stages of 50% and O2. For an open circuit dive with a bottom time of 30 minutes at 160 feet (50m), the dive is around 75 minutes long. Most of the superstructure on the upper levels has collapsed—most likely due to the intense heat from the fire. No hazards seem to be present on the upper remaining decks, although one of the two conning towers shifted sometime between the last two visits, which does show potential dangers and deterioration of the vessel. The lowest decks, including the engine room, have yet to be explored. Teaming schools of Jacks and many other fish call the artificial reef home and the almost total lack of human visitors has preserved much of its originality. It’s not a difficult wreck to dive, aside from the depth and penetration, which require proper training. Great visibility, plenty of ambient light, and warm waters make it about as enjoyable as it can get. Coming across something of this size that was ‘forgotten’ does not happen often. It’s literally a diver’s dream come true.

With excellent access and egress, this wreck should provide an amazing and safe adventure for years to come. Chris and Jan are already planning their return to explore deeper into the bottom of the MV Geopeter. Their new mission is to share this amazing find with others who are interested in making this the apex of a tech diving trip to Siquijor! 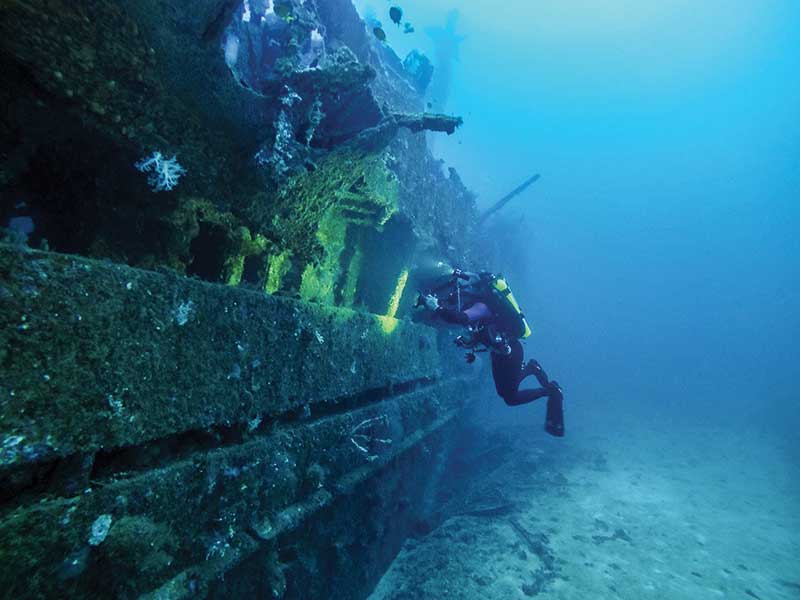 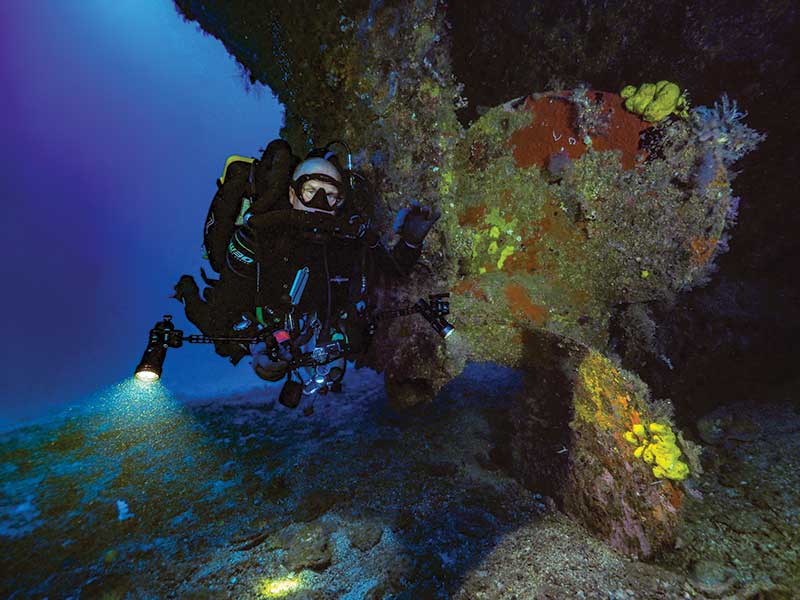 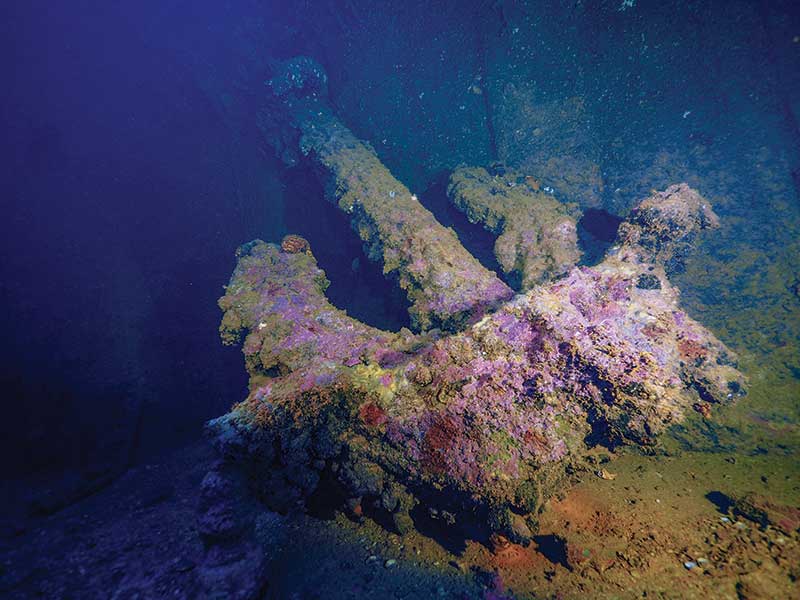 Welcome to the Maldives video

The Maldives Islands lie Southwest of India. Scattered across the equator in the middle of the Indian Ocean, the gem-like islands of the Maldives depict the rare vision of …

Aggressor Adventures announces the addition of the Red Sea Royal Evolution (RE) Aggressor to its excursion lineup in Egypt. The new liveaboard joins the Red Sea Aggressor II and …