Exclusive interview: Jill Heinerth on writing Into The Planet

Unless you’ve been hiding in a cave (which would be appropriate), you would know that Jill Heinerth’s memoir, Into The Planet, has been released. We sat down with everyone’s favourite cave diver to get an idea of what went in to the writing of diving’s biggest book release…

Interview by DIVER Editor Russell Clark (who recommends you buy a copy – it also makes for a great Christmas present!) 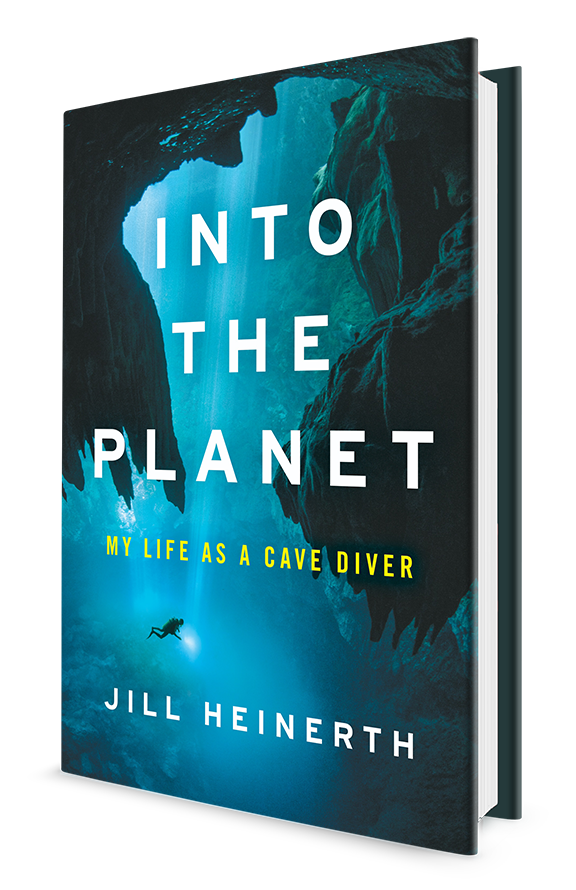 DIVER: Congratulations on the release Jill. It’s a fantastic book that will no doubt inspire many people around the globe. I really enjoyed your approach, focussing on just a handful of key cave diving moments to build the book around. Were there any that you had to really wrestle with leaving out? And will they make an appearance in a future book?

Jill: Oh yes! Literally the latter half of my life and explorations are on the cutting room floor. The chapter called “A Little Bit of Magic” barely teases some of those projects like diving inside lava tubes in Lanzarote and exploring beneath the Sahara. I decided to concentrate on the formative years of my life since people so often ask me how I came to be in this career as a full-time cave diver. I have a contract for a second book with Penguin Random House, but we honestly have not yet discussed what that will look like. I have a lot of ideas from non-fiction to self-help and even a novel. We’ll see!

How did any historic logs, journals, sketches, videos, photos, etc. help you prepare for this book?

The old journals were critical to restoring my memory about events that happened twenty years ago and longer. Reading those journals again was interesting because there are many details that I forgot. I also got a look into my mind as a young struggling dreamer. Even stringing together the chronological order of my experiences would have been tough without the journals. I’ve had a busy life and the dates and names morph into a tangled mess in my memory. But ultimately, the journals helped me reconstruct my experiences in a rich way, reminding me about the smell and feel of a certain place. I wanted to transport readers with me and the detailed notes really help.

Was writing a book ever something you thought about in past?

Given that I wrote all those expedition journals, I suppose I always imagined that I might write a book. I was that kid in kindergarten that always had to participate in “Show and Tell,” where you bring in something to class and talk about it to the other kids.

When I started to get serious about writing the book about seven years ago, a New York agent reached out to me about representation. I met with him in a beautiful Central Park restaurant and had a nice lunch. I was flattered by his interest, but I did not feel the connection. It was years later in Toronto, when another agent reached out, that things came together quickly. We immediately hit it off and I knew I could work well with him. In the course of a few months, I completed a proper proposal and he had a deal for me within hours of release. By the time the book hits the shelves, it will have been three years since we first met. The writing, editing, and PR process is longer than I ever imagined, but it took that long to make it right!

You’re all over the globe, how and where did you find time to write? What’s your process?

I write in the strangest places. I write a lot in the really uncomfortable seats in airports on long layovers. After having trouble finding a closing chapter for the book, I found the inspiration in a tiny cold cabin on the Arctic Circle. I have suffered from writer’s block plenty of times. The hardest part of writing the book was lacing together the narrative threads that would carry the stories along in a cohesive way. That literally took me years. I wrote story elements on note cards and stuck them up on the wall. I threw some away and broke others down into sub categories and moved them around until the story made sense. In a way, it helped me make sense of my own life’s choices too. The exercise helped me see how the good, bad, and ugly events in life all built who I am today. When I was really stuck with writer’s block and unable to put it all together, I sometimes stepped away for months or even a year before revisiting the work and starting fresh.

How does it feel to bare your soul for others to read?! Did you question your choices, and did you look for guidance from anyone?

It can be very difficult to bare your soul in a book. I worried about how people might feel about how I portrayed them. I worried about whether my parents would feel badly about elements of suffering that they were not aware of. I didn’t want to hurt anyone’s feelings. My husband Robert gave me great guidance. He reminded me that it was MY story, not anyone else’s. He encouraged me to be hyper-honest, insisting that people would not read something that was not authentic. That said, I was very private during the writing process. I bounced the first drafts off my friend Pam Wooten to get a sense of readability, but then I went dark with my editors and worked another year to make a very different book. I thought my editors would be correcting grammar, but they were more about helping me dig deeper into my memories, tugging at my heart to be more vulnerable about the reality of my life.

Have any authors inspired you?

I love the writing of mountaineer Joe Simpson. In fact, there are a lot of mountaineering books that I admire. They have a similar rhythm to my life – expeditions, risky endeavours and finding the balance between fear and exploration.

It’s a very tight read – it feels muscular, with no flabby bits! Was it hard to keep things lean? Did your publishing team help, or was it years of editorial experience?

Okay, that is hilarious. I was warned that it is tough to write enough to fill a regular length book. My first draft was nearly the length of two books. I had single chapters that could have been entire books. It was really tough to cut sections and characters that were really formative in my life but the book got better and better as it got tighter and tighter. That means there is a lot of behind the scenes material that was left out. The earliest versions of the book were much more technical and detailed. That might have thrilled the diving audience but it was too complicated for the mass market reader. I had to simplify the diving yet still honour the technicality, describing it in layperson’s language that made sense. Perhaps one day I will write some articles for divers on the details that were cut!

You talk a bit about facing online criticism through out your career, do you feel you’ll face more mwith the release of book? Does it effect you as an author?

Oh yes indeed! Writing a book is vulnerable and gut-wrenching. Just yesterday as I recorded chapters called “Waiting” and “My Dead Friends,” I was reduced to sobbing in the studio. Reading my own words took me right back to the Florida woods with my friend Wes Skiles as we prepared to recover the body of a close friend. The Director Kate Hurman was incredibly supportive. She said, that hearing the rawness is good but it can’t be too raw. Hearing tears and sobbing in an audiobook would be too much for the listener. When they can’t reach out and see or touch you, it is too overwhelming. A box of Kleenex later, I think we got the take. I still feel vulnerable at times, worried about what people will say or think, but I now realize it is my truthful story and can’t be any different than the way my life played out. I’m sure I will get reviews of all types, but I imagine my skin will get thicker each time!

What biographies, or further reading, can you recommend to people who enjoyed Into the Planet?

Some of my favourite reads include, Joe Simpson’s Touching the Void and The Primate’s Memoir (a fantastic memoir about Africa). For reader’s interested in cave diving or some of the characters in my book I think they should check out James Tabor’s Blind Descent.

The book has an “unfinished business” feel to it, in the sense that this isn’t a closure to a career, but a sign of more to come. What’s next and where do you hope the future will carry you?

Yes, the book is really the beginning of my life in some ways. A career as a cave diver has not exactly afforded me many options for retirement. That said, if I had the financial security to “retire,” I would probably do exactly the same things with my life! I hope the book sales might be enough to offer a bit more security so that I can slow down and focus on volunteer and philanthropic efforts without worrying about basic survival money and finding funds for projects I really care about. In my dream future, I will be actively pursuing exploration and documentation projects that make the world a better place, communicating about important issues like water conservation and climate change. I’m doing that now, but with some financial freedom and being untethered from searching for support, it would be so much easier. I feel an urgency to make good media about these issues and don’t feel that we have a lot of time to change the public perception of the way forward.

For fun – who would play you in the movie version of Into the Planet?!

Ah… that is a tough one. I think that when Hilary Swank played the woman boxer in Million Dollar Baby she captured my heart. That would be something!

Into the Planet is available now and can be purchased from Amazon.
Read our 5 star review here.
Learn more about Jill here: www.intotheplanet.com
Listen to Jill’s excellent podcast here.
Read Jill’s latest opinion piece in the LA Times.

Text by Albert Podell The days and the dreams of my childhood were dominated by the events of World War II. The Nazis and the Japanese were an existential …

How long have you been diving? I was certified in my last year of high school in 1976 in Oakville, Ontario. From there I spent three months in …

Finish divers Eelis Rankka, Tommi Salminen and Jukka Pelttari made this stunning video in lake Saarijarvi, Finland. Over the last few weeks the video has popped up on every …