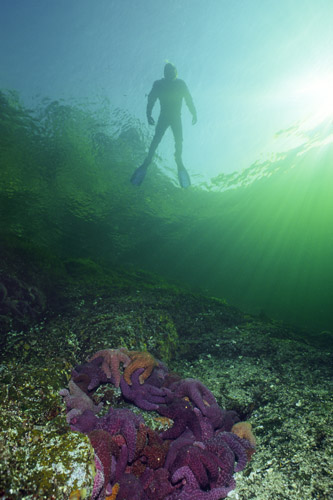 Winter diving along Canada’s Pacific shore has its benefits and principal among them is the astonishingly clear water to be enjoyed much of the time by scuba enthusiasts up and down the length of the British Columbia coast. As temperatures cool and summer plankton blooms die off, underwater photographers happily anticipate the conditions so conducive to their pastime. And though winter skies are typically grey and overcast where the sea meets BC’s mountainous terrain, there are days, glorious days, when it all just falls into place and even those memorable tropical dives can’t compete. Such was this day diving Agamemnon Channel, a scenic fjord on the province’s Sunshine Coast. There, I’d been exploring deep walls where magnificent cloud sponges and gorgonian corals can be found. Later, in the sunlit shallows I was photographing this (spawning) aggregation of Purple or Ochre sea stars (Pisaster ochraceus) when my buddy Bill Reed snorkeled overhead giving the image a greater sense of depth and adding that appealing human dimension to the composition.

Text and Photograph by Eiko Jones   I first started shooting dogs in the water when Mortimer, a friendly pooch, came down to visit me photographing in the Campbell …

The Dive Industry Association of British Columbia (DIABC) announced the online release of a new video promoting scuba diving in Beautiful British Columbia. Funded in partnership by the DIABC …