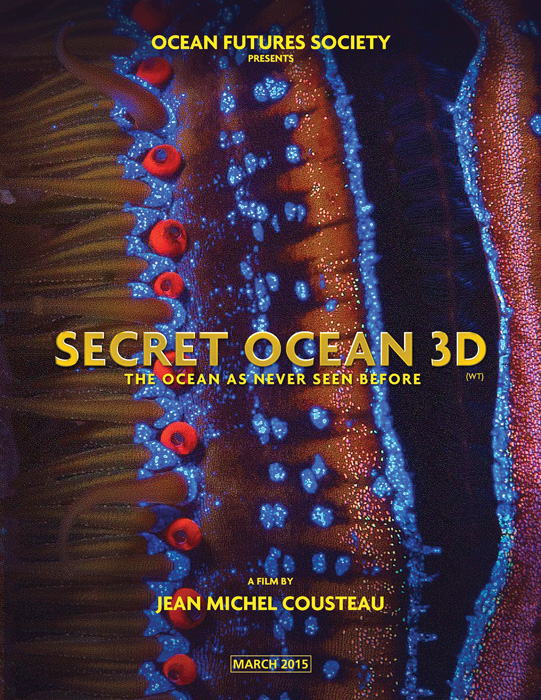 Gaze across the glistening sea and watch as the sun’s rays glimmer and bounce off the ocean waves. Water covers more than two-thirds of our planet, and yet the world below the surface of the world’s oceans is still mysterious to us – from those who merely marvel at its beauty to scientists who spend their lives searching for answers to its secrets.

Over the course of my life, I have had the honour and privilege of dipping below the surface of the sea to soar nearly weightless among the animals that inhabit the ocean world below. My dream has always been to share my experiences in these beautiful and precious underwater cities that teem with the dazzling diversity of life. With new advances in digital and macro-camera technology, along with the unwavering dedication of the Ocean Futures Society and 3D Entertainment Films teams, I am thrilled to share some of the ocean’s most beautiful mysteries with the world. Secret
Ocean 3D is my newest film, set for release in March 2015. With it I bring to the large digital screen the secrets and beauty of the sea that have touched me most deeply.

To bring a world beyond the scope of the naked eye to a magnificent 3D cinema screen is a dream.  I am confident this film will bring each one of us closer into the heart of the ocean world. Life began in the sea – and for millions of years, every form of life has been forced to find ways to adapt and evolve to challenges they face. What has emerged is an ocean world bound by an intricate system of balances, with each process of life influenced and altered by the living and nonliving world around it.

Secret Ocean
3D brings us up close and personal with some of evolution’s most ingenious relationships. In the web of life, all creatures – plant and animal and microbe – are intertwined and interdependent. This oceanic cohabitation has resulted in some truly amazing interactions among very unlikely partners. 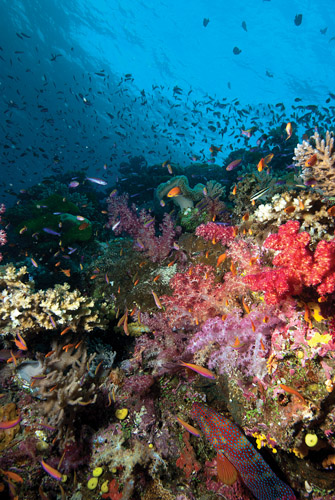 Breathtaking coral reefs give rise to the greatest diversity of life found anywhere on the planet. This is only possible because of the intricate relationship between corals and certain types of single-celled algae that live within the tissues of their coral host. This microscopic relationship, something which only a few decades ago we did not know existed, brings together forms of life that help one another survive. The stony corals that build coral reefs rely heavily on their symbiotic partnership.  The corals provide the algae a home, fertilizer and access to the sunlight, which the algae use to make sugar. In return, the algae make excess sugars available to the corals, enabling them to survive in the otherwise nutrient-poor tropical waters. It is a system based on the advantages the two groups of organisms give to one another.

Unfortunately, corals are under many threats from human activities.  On a global scale, climate change and ocean acidification are threatening reefs worldwide.  On a local level, deforestation and coastal runoff bring pollution and sediment from the land into tropical clear ocean waters. Debris and sedimentation block sunlight to the algae; if the algae cannot make enough sugars, the reef building corals cannot survive. It is a delicate balance of nature, and one we humans must protect if we wish to sustain our own future on this planet.

Camouflaged cryptically near the sandy seafloor, a spotted shrimp goby hovers precariously at the gate of its burrow. Constantly on watch, he guards the door as his partner – a nearly blind pistol shrimp, excavates their burrow. The shrimp creates the underground burrow, which is shared by the two species. If danger approaches, the goby wiggles his tail. The sensitive antennae of the shrimp recognize the alarm signal and the pair retreat to safety. How unlikely: a fish and a shrimp? Our 3D cameras take us right up the goby’s front door as we watch them together, two species that rely on one another and both benefit from the interaction, a type of symbiosis known as mutualism.

And of course, there is the iconic anemonefish that lives among the dangerous stinging tentacles of its anemone host. Certain species of damselfish have evolved over time to live in close association with anemones, a close relative to corals and jellies. Anemones, like corals and jellies, possess stinging cells that emit a harpoon-like structure, and often venom, into whatever touches them. Anemones protect themselves from their own stinging cells by having a special mucous layer covering the stinging tentacles. Anemonefish continuously rub up against this mucus layer, and in doing so they use the anemone’s own defense to protect themselves as well. The fish can hide in the cover of the anemone’s stinging tentacles and the anemone receives nutrients from the fish’s waste, as well as protection against other fish species that eat anemones.

Using 3D cameras with the highest resolution technology, we take you into the heart of the ocean and we share with you the beauty and extraordinary secrets of the sea. The ocean holds many secrets, both large – the ocean moderates the entire climate of the planet, redistributing the heat across the globe and allowing Earth to be a habitable place to live – and small – harboring species that are responsible for recycling the very molecules like carbon and oxygen that sustain life.

We still have an infinite amount to learn, to understand and to appreciate if we are to continue to thrive on this planet. My mission for decades has been to educate and inspire future generations to fall in love with and protect the ocean. Secret Ocean 3D will help me with my lifework by allowing me to share the source of my fascination and awe with the rest of the world.

ByJean-Michel Cousteau Nearly 40,000 people gathered in front of the White House in Washington D.C. on Sunday, February 17, 2013 for the largest protest in U.S. history to address …

Salmon: Lifeblood of the Pacific Northwest

By Jean-Michel Cousteau The biological clock of the Pacific Northwest is set to the rhythm of the ebb and flow of five different species of Pacific salmon: Chinook, Chum, …