It’s an inside job – to be sure – but it’s the emergency rescue kit taken on every dive that keeps the ‘never say die’ attitude alive! 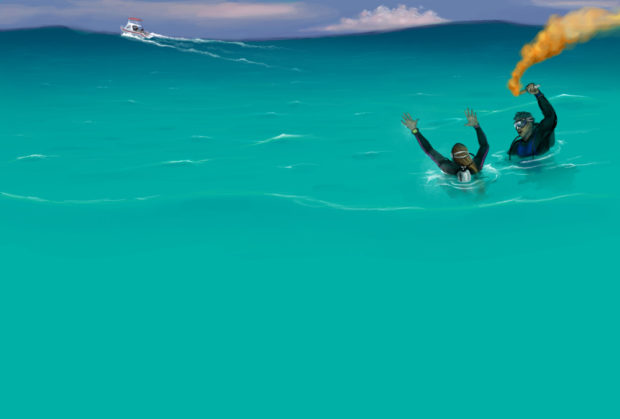 AP – Four Russian scuba divers who were swept away by strong currents in the shark-infested waters off southern Egypt were found alive Tuesday after they managed to swim miles back to shore, said a tourism official.
News Report August 2009

Rarely does everything go exactly the way we want it to: in life, business, diving, and especially take-out food. And that’s okay, since the serendipitous events of the unexpected are sometimes a great learning experience. Or they can be yet another episode in natural selection. Hey, Darwin never worked at Burger King!

Of course, anticipation is a first line of awareness that conditions the diver to expect things to go wrong and to adjust continually a mental protocol of things to do when circumstances find you ‘circling the drain’ in some situation or another.

Mental preparation and skills conditioning are the first element of survival. It helps to have the extra edge of knowing that you can beat the situation by your resolve and behaviour. Remarkably, the only difference between some survivors and those who perished was attitude.

In diving, being equipped for contingencies can ease your eventual encounter with them. And, significantly, an attitude of confidence allows you the edge in dealing with stressful, even dangerous circumstances. My first dive was in the late 1950s and since then I’ve managed to step into the world of contingency with both feet on more than few occasions. Several brushes with mortality were thwarted, perhaps as much as anything, by simply refusing to accept that my number was up. And although rattled, I was always running through my checklist of options. Giving up wasn’t in the cards.

Consider this Vince Lombardi quotation from How to Survive on Land and Sea, published in a U.S. Navy manual in 1943:

Life’s battles do not always go
To the stronger or faster man,
But sooner or later the man who wins
Is the man who thinks he can

There are World War II accounts of seamen who escaped death in sinking convoy vessels only to lose hope in the lifeboats and simply decide to die. Their shipmates, who marshaled the courage to cope with the fear that eventually everyone must face, ‘decided to live’ in the same circumstance and were rescued.

Some years ago, three divers got separated from their dive boat and drifted away in the dark Gulf Stream. In spite of being similarly equipped and in warm water, two died and one survived. The survivor later recounted the utter hopelessness that informed the discussion between his partners: “Will we drown, die of thirst, or be eaten by sharks?” Not exactly the power of positive thinking.

“The hell with Door Number Three, Monty, I’ll take what Carol’s got on her table”… pretty much summed up the survivor’s attitude, and with that will to live he finally swam away from his fellow driftees. For him, their grim take on the situation was clearly detrimental to his sense of survival. Hell, their fatalistic outlook already had him measured for a pine box, it seemed. So he struck out on his own and three days later was saved.

Sadly, there’s always another case of a diver or divers lost and not infrequently ‘left’ at sea, being reported in the news. Back in 1994 some divers were lost in Palau on a drift dive. A combination of mistakes led to their marooning but, ultimately, the biggest problem was that they could not be seen by rescuers looking for them.

There’s been a lot said and written about how to survive the unexpected underwater; less is devoted to surviving a bad situation back on the surface. And that’s where a strengthened resolve not to be fish food is helpful, but no less than the common sense that equipped you with the emergency rescue kit.

Surface signaling apparatus should be a part of every diver’s standard equipment for every dive. Economical tools that offer a fighting chance for rescue include an inflatable ‘safety sausage’ and a flasher/strobe. These items are small enough to be carried without intrusion and cheap enough for anyone who can afford to buy basic dive gear.

I have spent far too many occasions in my career abandoned by third world boat drivers in a host of scenarios. If you haven’t experienced a Yucatan sunset, drifting past Cozumel as your boat steams purposefully in the opposite direction, then you simply can’t appreciate the island as I have, watching the lights of Carlos & Charlie’s fade between wave crests.

After my last experience – a four-hour drift into oblivion back in 1989 – I bought a carton of safety sausages and handed them out like a proud new dad with a fistful of cigars. Nowadays I also carry a strobe for any night situation and orange smoke flares for day. I’m especially attentive if water conditions lend themselves to significant drifting, which is much of the time. And I’m equally alert if I don’t know the boat operator. And, the fact is, I’ve used my emergency signaling gear every year when, inevitably, Mr. Murphy chooses to strike.

I’m also a firm believer in borrowing money from the captain before the boat leaves the dock; now there’s a tie that binds!

“There’s a diver missing? Well, call me if you don’t find him in a couple of hours. Wait…oh Christ, is it Gilliam? He owes me fifty bucks! Scramble the choppas!”

Kidding aside, there are many excellent products available today that can dramatically increase your odds of being detected in a dark, rough ocean. And the investment is probably less than your New Year’s Eve bar bill.

At this point I could say consider carrying the following items with you but if you agree with me that some of the risks in diving are beyond your control, then these items shouldn’t be any more optional than the gas you breath on a dive.

All these items can be stored in a BC pocket or in a tank mounted fanny pack. They can be the difference between rescue or a very long wait with the ‘Donner party’.

Look at it another way. Wouldn’t it be a bummer to execute a magnificent free ascent from 200 feet (61m), or pull off some other amazing death defying feat, only to expire on the surface, drifting away in the fog where no one could find you.

But regardless of the circumstance, remember that your will to survive can be your ‘winning hand’ while others toss their chips in early. Fear is a potent adversary. But the human species has a remarkable ability to endure what might seem the impossible. It all comes down to confidence. Attitude and action. You can start by wearing your ball cap backwards and a Raiders tee shirt under your wet suit. Al Davis is right: “Just win, baby!”

This Exosuit is production model 001 and the first in a series of three designs from Nuytco Research of North Vancouver, B.C. From the first ergonomic mock-ups and tests …

NOVE recently announced their first automatic Swiss-made wristwatch via Indiegogo. The new Trident R150, or simply the Trident Automatic, is a sleek redesign of their Trident line of watches, …

Famously, Henry Ford said, “You can have any colour as long as it’s black.” That was then. Thankfully, diving has come a long way from the day when a …