Though modest in appearance and size, this food chain favourite is at the centre of a continuum oceanic in its scale and unforgiving in its nature.

Text and Photography by Michael AW

Even the simple sardine is capable of greatness. Collectively, and I’m talking more than a family reunion, these innocuous fish offer up an extravaganza truly oceanic in scale. It’s often called the greatest shoal on earth – a descriptive both clever and correct!

More commonly referred to as the ‘sardine run’, it begins each year off the Cape of Good Hope at the southern tip of Africa. This grand migration of billions can be up to 12 miles long, two miles wide and about 130 feet deep (20km long, 3.5km wide and about 40m deep), and it moves…constantly. The fish travel north along South Africa’s eastern shore toward the Transkei (Eastern Cape) and province of KwaZulu-Natal, an annual occurrence May to July, long recorded in Zulu legend.

All by itself the migration is a mind blower. When you add to it the hundreds of thousands of predators that show up to feed on the sardines, well then you have a spectacle that easily rivals the great migration of the Serengeti. Imagine if you will, 100 billion sardines, 150,000 Cape gannets, 20,000 dolphins, 10,000 sharks, and Bryde whales all gorging themselves on sardine ‘bait balls’ right before your eyes. The memories I have of this will never fade, no matter how long I live. To my mind it’s right up there with the ‘big bang’… a marvel of the natural world triggered by some cosmic clock whose ticking we neither hear nor understand. All we really know is that in the wild kingdom there’s a food chain with its predators and prey and the sardine spectacle is a window on this life and death drama that we’re privileged to observe.

On the first day of my first sardine run in 2005, I found myself within a bait ball the size of a cathedral. Dolphins were charging in from both sides, pushing the silvery mass to the surface. Gannets with their chisel hard beaks rained down like missiles striking the face of the sea at fearsome velocity. Streaking through the water, their trajectories are defined by fizzy white ‘vapor trails’ that reveal just how fast they can move through the dense seawater. Their high-speed dive combines with a lightning fast strike or snap at fish as they penetrate the bait balls. Wearing a cave diving helmet would have made me feel a lot more comfortable!

My objective that time out was to photograph a bird with a fish in its beak, framed in the centre of a bait ball. It took me 45 minutes and hundreds of frames to reasonably anticipate the action I wanted to capture. Luck was with me; I got my shot… and I was hooked. The experience wet my appetite to the point of obsession. I had to return. It was like a sacred quest and I’ve been trying ever since to get the perfect shot.

The sardine run is a wild ride and there’s a mysterious side to it as well. The main spawning grounds for these fish are off the Southern Cape of South Africa, where the adult fish mass for a prolonged breeding season through the southern hemisphere’s spring and early summer. Their eggs are simply released into the water, fertilized and left to drift in the open ocean. Currents carry most of the developing larvae west and north into the Atlantic along the country’s west coast. This fact raises questions about the annual migration that occurs during winter months along the east coast. It remains an unexplained phenomenon.

The sardine spectacle of my experience begins as hundreds of swirling shoals of fish form in waters far to the south of the African continent. Cooling winter temperatures direct the fish toward the northeastern Cape and KwaZulu-Natal. The north flowing cold water moving inshore of the warmer south flowing Mozambique Current allows the sardines to filter feed on the nutrient-rich upwellings of plankton that manifest along the coast. Metabolizing their low-density lipoprotein diet into a few grams of what’s arguably the most concentrated source of nutrition on the planet – Omega 3 fish oil – makes the unassuming sardine a highly sought after commodity. Only a few fish species can compare or exceed the Omega 3 content of a sardine. These include pink and chinook salmon, herring and Hoki, a cold water fish from New Zealand. And humans only recently, in a relative sense, have come to value this oil. Over the millennia, one assumes, sardines have been a preferred food of many large marine animals for the same nutritional reasons. Among them are sharks, dolphins, seals and whales, along with certain seabirds – the gannets and penguins – equally discerning about their diet.

It occurs to me that with all its Omega 3 benefits as brain food, joint lubricant, and who knows what else, we should be pushing a gourmet sardine soup to become the culinary king replacing shark fin soup.

It’s during the May-July period that the sardine shoals transit the South African shore, allowing intrepid wildlife enthusiasts the opportunity to briefly glimpse this majesty of nature. What I’ve come to understand is that the sardines prefer water that’s 63°F (17°C) and that remains below 68°F (20°C). When the run is on it is, as I’ve said, a sight to behold. To my mind the wave upon massive wave of silvery fish is the marine world equivalent of the amazing wildebeest migration that occurs not so far away in the adjacent terrestrial world of east Africa. Of course it’s as much about the entourage of predators that accompany the sardines, as they move along the aptly named Wild Coast. These waters literally boil with sharks, dolphins, Cape gannets, cormorants, seals, and on occasion, orcas, albatross and penguins, all of which have followed the sardines thousands of kilometres from the Southern Ocean.

The sardines shoal tightly together to survive, a kind of strength in numbers thing they do in an effort to minimize the chance of being eaten by predators. But the sheer numbers of the many different predators are shocking. There are Bronze Whalers, Zambezies (bulls) and sometimes Tiger sharks in the hundreds. Bottlenose and Common dolphins like sheepdogs herd the shoals into tight ‘balls’, hence ‘bait ball’, and as they gorge themselves so do the sharks and Bryde’s whales swarm from beneath for an easy feast. Dive-bombing gannets pick them off from above in a sustained and unforgiving aerial attack. From what I have seen, the dolphins do all the work. The many other predators, like so many scavenging hyenas, unashamedly free load off the effort of the marine mammals. I recall one encounter shooting a bait ball the size of a city bus that was being herded to the surface by about a dozen dolphins. Once in the shallows about 50 sharks moved in, pushed the dolphins away, and decimated the sardines inside of 15 minutes. Literally, there was nothing but a sea of glistening scales left to hint at the annihilation I witnessed.

The sardine run is a rush. It can be like some contagious affliction. It’s the sort of thing I’d like to experience every year but that’s not always possible. Ocean warming is a problem that could bring this spectacle to an end. In the 2009 winter season we recorded a sustained water temperature of almost 72°F (22°C) over a 20-day period. It’s the first time the water temperature has risen to that level, which is way too warm for the sardines to run close to shore. Add to this the pressures of an unsustainable global fishing industry and less than adequate environmental management and it’s fair to conclude there will be fewer sardine runs. Of course, depleted sardine stocks affect the entire food chain, adversely impacting many shark species and marine mammals and more. 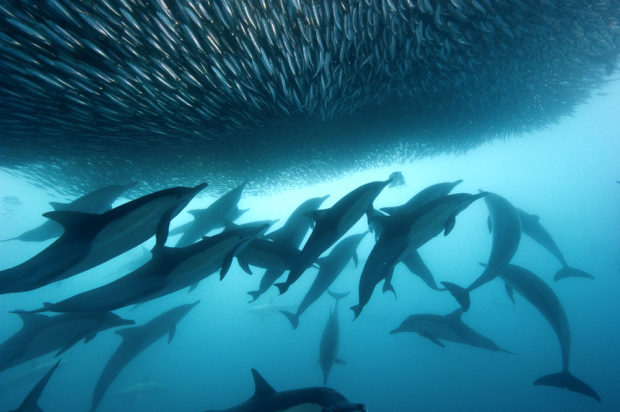 I think we’re at a tipping point with the oceans. Some urgent environmental fixing is in order. The great migrations have taken place for eons but man’s detrimental effect on them has taken far less time. Selfishly, I can say that I’m thrilled and privileged to have witnessed this miraculous marine phenomenon on five separate occasions since 2005. But I’ve yet to nail that perfect shot of the mother lode: a bait ball the size of a department store. Meantime I continue to salivate over Doug Perrine’s bait ball and shark pictures (DIVER July-August 2007) that earned him the BBC Wildlife Photographer of the Year award in 2004. Well, it ain’t over ‘til it’s over!

Spending hours inside a metal tube at 30,000 feet with hundreds of other passengers is not the best way to start a vacation. Fly & Sea Dive Adventures ease …

Australia doesn’t mess around when it comes to species, enourmous reefs, and impressive wrecks Words by Eric Vohr The Great Barrier Reef is so enormous it can be seen …