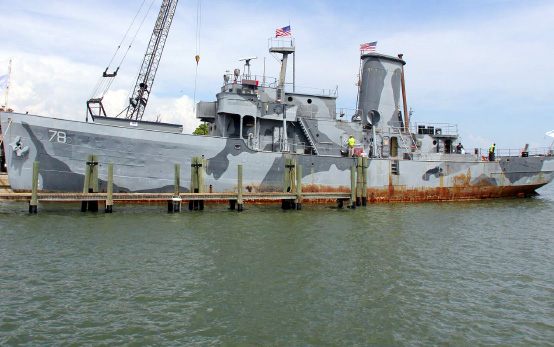 This Monday, July 2nd, will see the sinking of the World War Two warship USS Mohawk, 28 miles off of Sanibel Island on Florida’s southwest coast. The new artificial reef will become the first Veterans Memorial Reef, dedicated to all US veterans the official name will be the USS Mohawk CGC Veterans Memorial Reef and will sit in roughly 90 feet of water.

The 165 foot WW2 coast guard cutter is the last remaining ship from the Battle of the Atlantic. She launched 14 attacks against submarine contacts, she was also made famous by being the last ship to radio General Dwight D Eisenhower before the D-Day invasion.

The “Mighty Mo” as she is known, will be sunk with replica guns, huge smokestack, bridge, deck house and massive propeller. Trained divers can descend the smokestack into the ships engine room to explore the inner parts and reduction gear.

But no sunken ship is quite complete without treasure and the Mohawk is no exception. Celebrity adventurer Pat Croce has hidden artifacts from his Pirate and Treasure Museum aboard the old warship, including an 18th century rum bottle and 17th century shot. The first diver to find the treasure using the hand drawn map, also sunk with the ship, will get to keep the booty and claim free passes to the museum.

A series of shaped charges will be detonated to sink the warship in approximately three minutes on Monday, July 2, 2012, 11 a.m. EST.

Welcome to the Maldives video

The Maldives Islands lie Southwest of India. Scattered across the equator in the middle of the Indian Ocean, the gem-like islands of the Maldives depict the rare vision of …

Hammered on Bimini: Getting shark-faced in the Bahamas

Text and Photography by Andy Murch You would think that a large, globally occurring species like the great hammerhead would be a relatively easy shark to encounter but until …

The Great Escape: The Turtle Hatchlings of Little Cayman

Volunteer payoff as turtle hatchlings high tail it for the sea On a quiet Little Cayman beach this July 5th, a small group of excited – and lucky – …