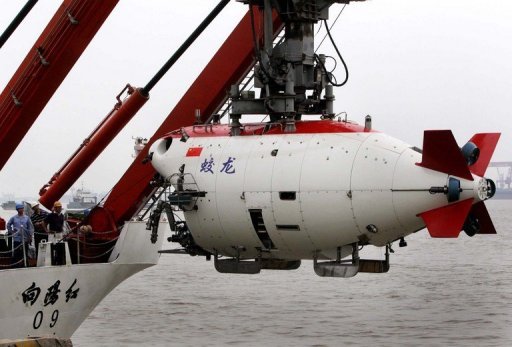 With James Cameron’s record breaking solo dive to the Mariana Trench now faded into media obscurity, it is now up to the Chinese to further push interest in ocean exploration and technology.

The first dive will challenge the depth of just over 16,404 feet (5,000 meters), with the final dives scheduled for a deeper 22,965 foot (7,000 meters). The six dives will test various functions and performances of the manned submersible, with each dive lasting 8 to 12 hours. The Jiaolong (named after a dragon from Chinese mythology) succeeded in diving 17,020 feet (5,188 meters) in the Pacific Ocean last July, enabling China to conduct scientific surveys in up to 70 percent of the world’s seabed areas.

The deep-sea dive comes as China plans to launch a spacecraft in an attempt for its first manned space docking later this month, part of its efforts to establish a permanent space station by 2020.

The expedition may not be as deep as Cameron’s or the 1960 Trieste, but deep ocean exploration and technical innovations are always welcome, hopefully the western press will give over some space to these much needed and inspirational adventures.

Tags: Exploration, Research, Science, Submersible,
The seas will no longer be safe in the upcoming robot apocalypse
The Drysuit You’ve Always Wanted
Previous Post
Next Post
0 Comments Leave A Reply

America’s Battle of the Atlantic

New mapping technology and a small manned submersible allow a team of scientists to 3D map a moment in history Text by Joseph Frey On July 15, 1942 Kapitänleutnant …

Coming to a reef near you… we hope!