Whether you’re a dive professional or a newly certified diver, diver rescues are something you should be familiar with. Rendering aid to a panicking diver is admirable but can put you at risk. Knowing when and how to help is critical—it’s better to avoid helping at all if you’re more likely to create a second victim than help the diver in need. Brush up on your diver rescue skills now, so you’re better equipped to make an educated decision about how to assist if the need arises. 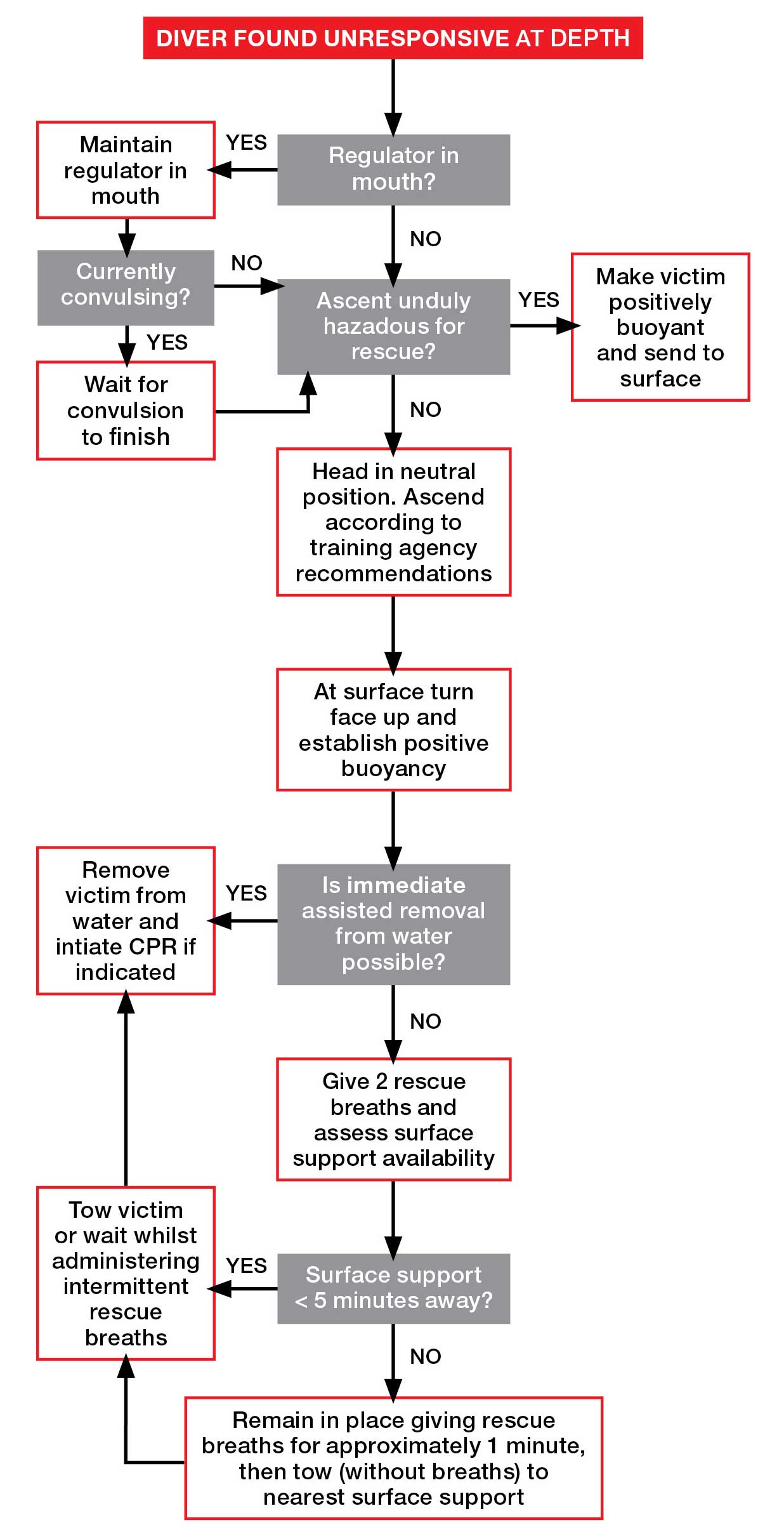 The rescue of an unconscious diver is one of the most sobering (and thankfully, least commonly applied) skills that divers are required to learn. The various techniques involved can be a challenge to master, and experts have spent years debating the finer points of bringing an unconscious or unresponsive diver to the surface. What’s important to understand is that any situation that results in loss of consciousness in the water has a high probability of serious injury or death. Because of this, it’s critical to bring a diver to safety as expeditiously as possible.

The way a diver is recovered to the surface, however, raises several questions about airway maintenance and potential barotrauma. It is possible that a diver, as a result of seizure or reaction to water in the airway, could have something called a laryngospasm—a spasm of the vocal cords that can result in a closing of the airway. This airway closure could potentially trap air breathed at depth in the lungs, which upon ascent could expand and potentially cause a pressure injury. The Undersea and Hyperbaric Medical Society (UHMS) Diving Committee is chaired by experts in medicine, physiology, and hyperbarics and has spent a lot of time considering this topic. Their solution is the following algorithm for the rescue of an unconscious diver:

This protocol prioritizes the idea that any diver not currently convulsing should be brought to the surface, made positively buoyant, and either be given rescue breaths and towed to safety or removed from the water to receive CPR, as determined by the environment. Each of these steps seems self-explanatory on its own, but piecing them together can take time and practice. Complex rescue protocols such as this one rely on frequent practice and regular knowledge updates.

The rescue of a conscious but panicking diver can be even more dangerous—to the victim and the rescuer—than the rescue of an unconscious diver. If there is a single most important concept in diver rescue training, it’s that no rescue should be attempted if it is likely to create additional victims. It’s easy to suffer injuries from flailing panicked divers, and serious harm might occur if a panicking diver tried to hold you underwater or interfered with your equipment on the surface or at depth. Never engage a distressed victim via a direct approach; swimming underneath, around, or behind is a great way to gain control of the diver while minimizing the possibility that they could grab you or your equipment. BCDs and tank valves provide great handholds for controlling a panicking diver’s movements as you tow them to safety. If you cannot safely approach a distressed diver, it is better to allow them to work themselves out of their panicked state or become fatigued or even unconscious than to put yourself at risk by directly engaging them. If the diver is conscious you can assume they’re breathing, and you can focus on controlling their movements, making them positively buoyant, and removing them from the water as rapidly as possible.

Putting your skills to the test in a simulated (or real-world) scenario is the best way to bring together everything you know and commit your response plan to memory. Even the best diver recovery is rather pointless without a thoughtfully planned follow-up, and you should consider the best protocol for your environment. Take the time to walk through exactly how you’ll respond to a few of the most common diver injuries—from the onset of trouble to the hand-off to emergency services. It’s easy to overlook small but critical pieces of an emergency action plan until you put it into action. Consider how you’ll stabilize your victim, remove them from the environment and provide first aid as well as how emergency services will be reached and engaged.

Tags: infographic, rescue, safety,
Be Prepared for your Next Liveaboard
Fall 2021
Previous Post
Next Post
0 Comments Leave A Reply

Be Prepared for your Next Liveaboard

By Margo Peyton Researching your next liveaboard dive trip? Be prepared to ask some tough questions. The tragic accidents that shook the liveaboard industry in 2019 served to remind us …

Dave Williams was just a kid when he made a farsighted commitment that eventually saw him blast off for the international space station. And his boyhood dive training and …

Thumbs up for seniors diving

By Stan Waterman I grow old… I grow old… I shall wear the bottom of my trousers rolled. Shall I part my hair behind? Do I dare to …