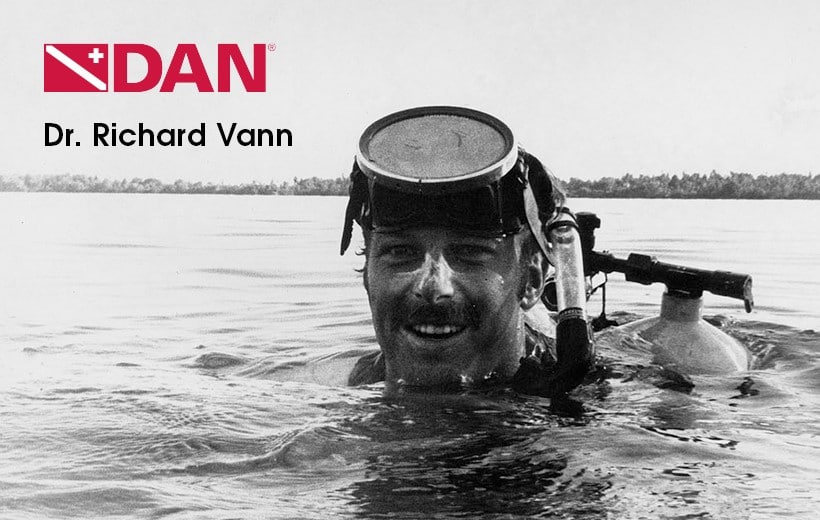 It is with great sadness that Divers Alert Network announces the passing of its former vice president of research, Richard D. Vann, Ph.D.

Dr. Vann was an esteemed researcher whose work focused on the physiology of breathing and exercise in special environments and the epidemiology of pressure-change-related injuries. His extensive career spanned more than 60 years, and his research supported the implementation of safer pressure-exposure protocols in diving, mountaineering, aviation and space exploration.

A former U.S. Navy SEAL, Vann was a true champion of diver safety whose work is foundational to many of today’s dive safety standards. He was dedicated to preventing dive fatalities and understanding the mechanisms of decompression sickness, and his outstanding leadership made a direct impact on nearly all of today’s leading dive safety researchers.

During his 40 years at Duke University’s F.G. Hall Laboratory and his 20 years at DAN, Vann conducted some of his most notable studies in the epidemiology of diving injuries, safety in recreational diving, and human decompression. Among the subjects of his research are the following:

In addition to this research, Vann was instrumental in orchestrating and publishing workshop and conference proceedings, modeling the probability of decompression sickness and analyzing dive injury and fatality data. Vann also made significant contributions to diving through his work at Ocean Systems, Inc. and as a member of U.S. Navy Underwater Demolition Team 12.

Vann has been recognized worldwide for his research and accomplishments by organizations such as the Undersea and Hyperbaric Medical Society (UHMS), NASA, the Academy of Underwater Arts and Sciences (AUAS), the U.S. Navy and others. His research changed the way the scientific community views and understands the mechanisms of diving injuries.

The life’s work of this scholar and gentleman led to the identification and resolution of many issues of substantial practical importance to divers. Dick Vann will be dearly missed by all who knew him, but his legacy will live on in all who are able to dive more safely because of him.

“The loss of the Dr. Richard Vann saddens me profoundly,” said Matias Nochetto, M.D., DAN director of medical services. “When I came to DAN 13 years ago as a young and foreign physician, I was given the chance of a lifetime to turn my passion into a career. But this privilege became even more significant when I realized I would be sharing a workspace with legends such as Dr. Dick Vann, whose work I had read for years. I will be forever thankful for the wisdom Dr. Vann imparted on me, and I am humbled to have also witnessed his humility, generosity and perennial smile. He will be fondly remembered by all of us who knew him at DAN, and his contribution to science will continue to inspire generations.”

“To his colleagues, Dr. Vann was a distinguished mentor and role model,” said Petar Denoble, M.D., D.Sc., DAN vice president of research. “He was also an exceptionally kind man with a big heart. His contributions to dive safety are truly unmatched, and I am grateful I had the opportunity to work alongside him for so many years. He will be greatly missed but not forgotten.”

“Dick Vann’s work made significant and lasting impacts on diving,” said Bill Ziefle, DAN president and CEO. “Because of him, divers everywhere are safer. It was an honor to work with him ― he will truly be missed by all of us here at DAN.”

Tags: dan, obitu,
Planning a family dive holiday
The Cayman Islands – 3 Islands to explore but each so different!
Previous Post
Next Post
0 Comments Leave A Reply

By Dr. David Sawatzky In the last three columns I reviewed vision underwater, common refractive errors, and reading glasses/ contacts.  In this column I will finish the discussion of …

Women Divers Deck the Halls Six new members were inducted into the prestigious Women Divers Hall of Fame on March 29 at the Beneath the Sea Awards Banquet. Barbara …

As the coronavirus (COVID-19) pandemic continues to sweep the globe, people from all corners of the world are coming together to help create solutions in response to the crisis. …