In Pursuit of Killer Whales: the Kapr Divers’ Expedition to Norway 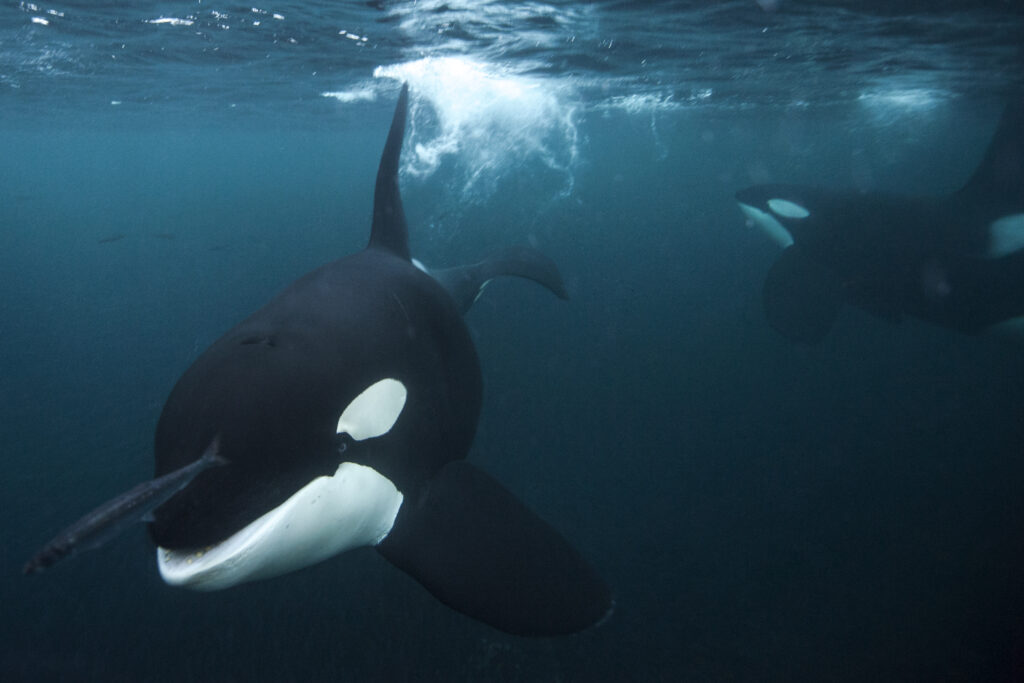 Divers share a collective passion for the underwater world and a mutual fascination with the wondrous creatures of the sea. Perhaps it’s swimming with dolphins off the sunny coast of California they dream of, or diving side by side with whale sharks in the warm waters of Western Australia. Or maybe, as in the Kapr Divers’ case, it’s making the journey 300 kilometres north of the Arctic Circle to Norway to spot the killer whales. With the northern lights above and the frigid waters below, it’s an adventure of a lifetime for this Czech team of divers.

Who Are the Kapr Divers?

The Kapr Divers are a group of diving professionals located in the Czech Republic. When the team of nine isn’t instructing advanced technical students at their PADI Dive Centre, owner and director, Petr Slezak, and his crew are embarking on extreme dives all over the world. They’ve traveled to Egypt’s Red Sea to discover an underwater safari, swam with hammerheads off the Galapagos archipelago, and tested their skills in the mountain lakes of the Austrian Alps. It’s their more recent trip to the far north, however, that has raised eyebrows.

In Search of Killer Whales

Since 2008, Petr’s goal has been to locate and dive with the dolphin family’s largest member, the killer whale, known to frequent the waters off Norway’s northernmost coast. “The wild Nordic nature in its subpolar regions has grown on me immensely over the last decade,” described Petr, reflecting on his motivation for making such a trip. “I’ve done several dives off the Lofoten Archipelago and in the Vestfjorden sea waters. The landscape is stunningly beautiful there. Everything from the northern lights to the delightful people keep me coming back. My first few years, however, proved to be unlucky when it came to finding killer whales.”

Fortunately, Petr’s luck changed in the early winter of 2015. “This time of year is perhaps the best time to spot killer whales, as well as other whales, in this region of Norway,” said Petr. During the colder months, the orcas are drawn to hunting the massive schools of herring which flow into the fjords (herring make for a risk-free, energy-efficient meal for the orcas versus the greater challenge of hunting larger animals such as seals or young whales). In Petr’s eyes, “killer whales are brilliant creatures. They hunt in groups, communicating and cooperating together. Some circle the herrings into a group, while others swim in and strike the fish with the great force of their tail fins. This action stuns the fish, allowing the orcas to eat in peace.” 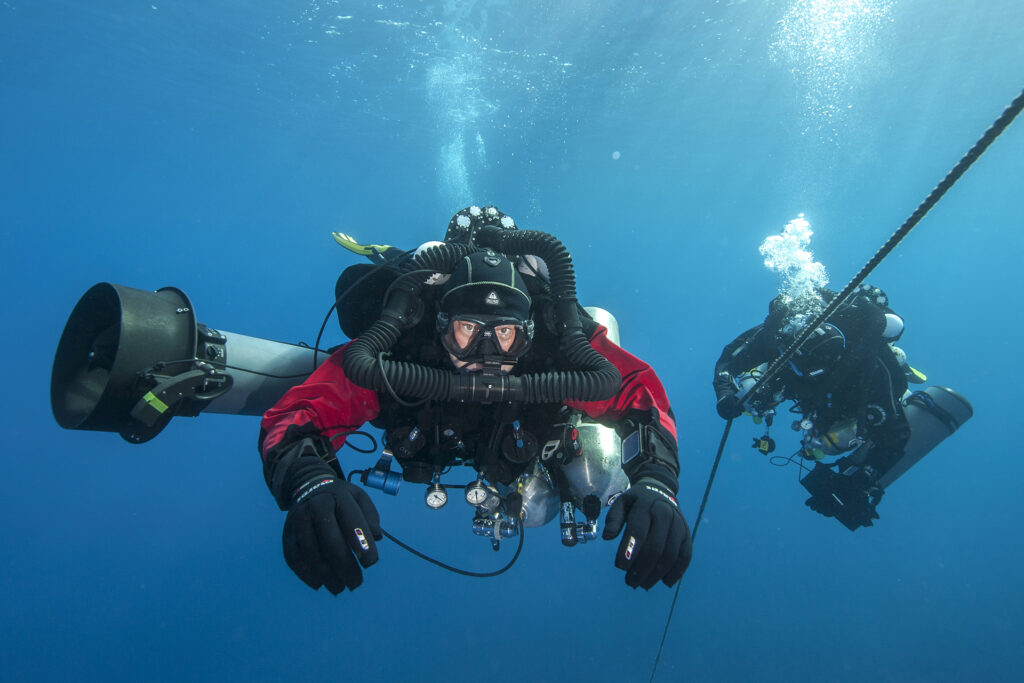 It’s these raw, primal moments that present spectacular diving opportunities and photographic moments. And being in the right place at the right time to observe a pod of killer whales in their natural element is Petr’s quest. And it’s certainly one that’s easier said than done, as there are several obstacles to overcome when diving in waters so far north. For example, just getting to the location is a challenge. Over the course of nearly a decade, Petr learned it’s better to  make the 3000 km trek from the Czech Republic to Norway by car (instead of traveling by plane and running the risk of flight complications plus luggage restrictions). Driving makes for a much better experience considering how much equipment he needs to bring: multiple Nordic-water-resistant wetsuits, snorkelling gear, his Liberty rebreather, photography equipment, food, and so on.

Once on site, Petr and his crew set sail each morning in search of the orcas and whales. “We usually manage to book a place right on the harbour. That way we can get in the water as quickly as possible,” described Petr. His team utilizes several small boats when looking for the animals, taking 4-6 people per boat. Once they’ve located their target, the drivers attempt to approach the whales; according to Petr, this takes some experience and, above all, patience.

On one particular excursion in 2015, the most extraordinary occurrence took place with just Petr and his boat driver and photographer, Marco, onboard. They woke in the morning to an icy wind chill and a daily high temp of -8 °C. Despite the freezing conditions, the men were determined to pursue their goal and so they set sail from the harbour into the bone-chilling headwinds. They managed to spot a couple of killer whales early on, but the animals fled quickly as the boat neared. However, it was as Petr and Marco rounded the corner into one of northern Norway’s many bays, that they were met with the most amazing scene: a pod of about ten majestic black and white killer whales in plain sight!

Petr and Marco observed the orcas for more than an hour, and it seemed the animals would remain in the bay for some time. However, suddenly, the whales began hunting a school of herring which prompted Petr to quickly throw on his mask, snorkel, and fins and get in the water. Petr swam with the whales along the water’s surface using his snorkelling gear while Marco stayed on the boat capturing the scene with his handheld camera as well as a “special underwater torpedo camera”. If the moment hadn’t come so suddenly, and without Marco’s support on the boat, Petr would have donned his CCR Liberty to photograph the orcas underwater. “The rebreather’s lack of bubbles really helps when photographing marine life. The less noise you make underwater, the closer you can get to your target,” he explained.

Petr’s experience in the water with the whales was nothing short of spectacular. He recounted, “I watched as the killer whales came in and out of my area of visibility. They seemed just as curious about me as I was of them. In time, we became more acquainted with each other, and they slowly dared one another to get closer and closer to me.” After about an hour in the water, Petr was in the company of three male killer whales. The orcas would occasionally hunt the herring around him, then come back to swim with him for a bit. In complete awe, Petr took as many pictures as he could, later telling us: “We were completely alone in that bay. Just the killer whales and me. I couldn’t even feel the cold, because I was so pumped up with adrenaline. It was truly a unique and unforgettable day.” 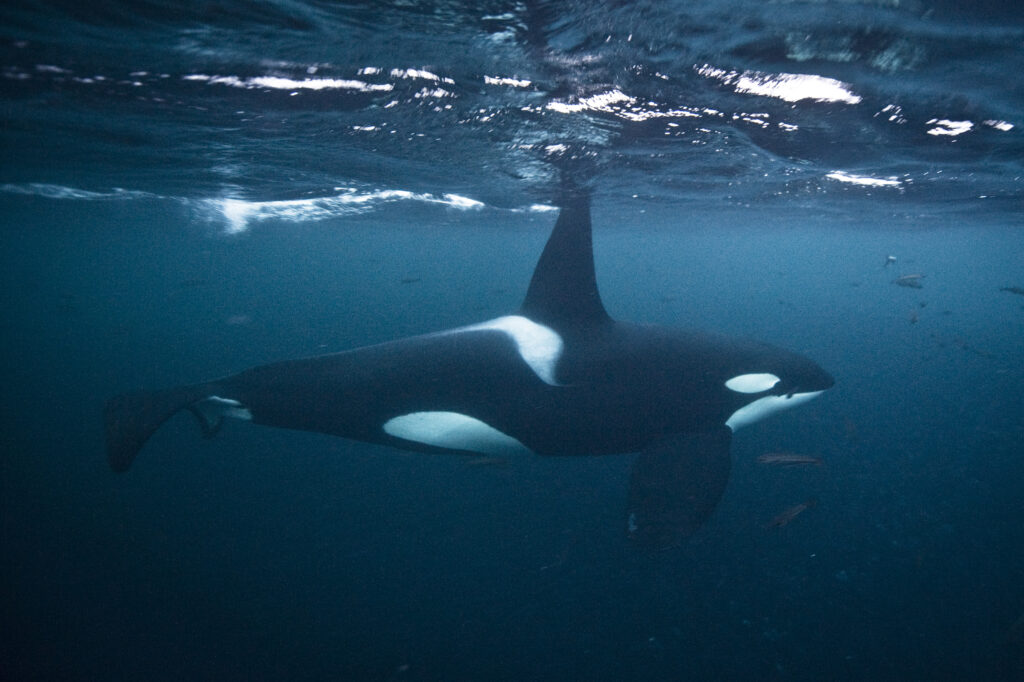 The Sighting of a Lifetime

As Petr and the three large males slowly grew used to one another’s presence, he was able to look around and watch the other orcas hunting the school of herring below. “I remember looking down about 15 metres and watching the killer whales swim in and out, taking mouthfuls of herrings with every dash. It was then that I caught sight of something white flashing through the school. It happened so fast, my eyes were spinning. Everything, including me, got out of its way as it rose to the surface. When it came to a stop, I was finally able to see what it was. An absolutely massive humpback whale had joined the party!”

As Petr tried to photograph the remarkable moment the best he could from the water, Marco managed to capture the picture of a lifetime from the boat. After some time, the whales made their way from Petr, Marco and the boat and swam into the horizon. While Marco helped Petr back onboard, all they could do was laugh about the incredible luck they had that day. Marco probably said it best when he told Petr: “I’ve spent months of every year for the past 12 years diving and photographing this area. But no one has ever gotten a shot of me with both a killer whale and a humpback whale!”

A Dive He Will Never Forget

In Petr’s own words, “the trip turned out to be a dream come true”. Even though the environment can be harsh, the water cold, and the fjords far away, swimming with killer whales in Norway is a diving adventure you’ll never forget. As Petr and Marco made their way back to the harbour with stiff muscles and smiles on their faces, they realized they just experienced an incredible moment which would be with them for life. Sometimes it takes a journey the wildest of locations to take part in the most unlikely of circumstances. Just as Petr said: “Diving with those killer whales and that humpback whale is one of the top experiences of my entire life.”

For more on the Liberty Rebreather, visit here.

Words and Photography by Brandon Cole Clinging to a sponge-covered piling under Australia’s Blairgowrie Pier, giant spider crabs hope to avoid being eaten by predators patrolling the sand below. Each …

Aggressor Adventures, known for its thrilling adventure vacations for guests around the world with 40 unique itineraries in 19 countries, is celebrating its 38th anniversary! While much has changed …

The Depths of Little Cayman