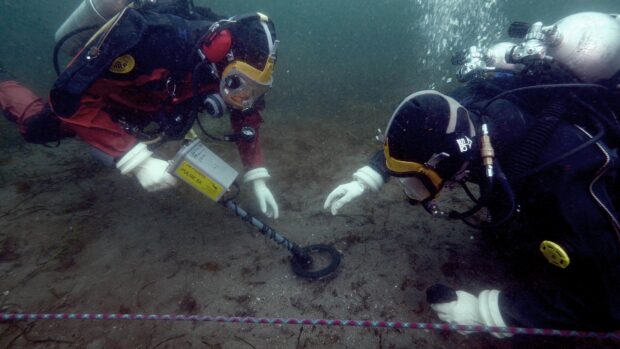 On a spring afternoon a call comes in to the police station citing an armed robbery has been committed at a local bank. The suspected criminals have fled the scene and EMS is in route. The last reported sighting of the suspects being seen was in a truck heading across the river over the I-88 bridge. Police cannot find the suspects, but a key witness says they saw someone in a truck throw something into the river. Could it be the gun used for the robbery? Could it be the stolen merchandise from the bank? Sounds like a good crime movie, right? The situation described is not a movie, but an actual event that occurs somewhere across the globe multiple times a day! In 2021 there were over 60,000 armed criminal acts performed and amongst those over 32% of the weapons are not found on the criminal upon capture.

A metal detector serves as an invaluable tool in the search for and recovery of missing, metallic evidence. This evidence can range from shotguns and handguns to ammunition and knives. As technology advances it’s not only firearms that are now being used in crimes. In today’s modern age cell phones are a massive, crime related item actively being sought by investigators on scene. Phones contain multiple sources of information that could lead investigators down the right path of case solving, becoming essential to recover. The Pulse 8X is the perfect tool to help locate that missing evidence. JW Fishers Mfg., Inc has been a leading producer of metal detectors for police, sheriff departments, government agencies and dive rescue teams. The Pulse 8X is the “go to” metal detector for those who want a commercial detector that can handle the rigors of police and underwater searching on a constant basis with a detection area unsurpassed in the industry. The Pulse 8X was rated the #1 underwater metal detector rated by The Department of US Homeland Security.

In 2014 the Orange County, California, Sheriff’s Department (OCSD) established a metal detector search team. The agency made important considerations regarding equipment selection and the development of training for metal detector use – one detector being the Pulse 8X. According to the SRRU “a key feature to consider for ground-search metal detectors is the availability of different sized search coils. One size coil does not fit all. For most searches, the default choice is the largest coil available for the unit. Such a coil provides the greatest coverage per sweep and the best depth penetration. In some cases, though, the terrain may not allow a large coil to get close to the ground. For these situations, users need a smaller coil.” The pulse 8X offers 7 different coil sizes, with the smallest one being 5” in circumference all the way to an 8” x 48” towable coil that is used topside on a vessel while towing the coil on the water floor.

Nassau County in New York uses the Pulse 8X on their water-based operations. According to their website “the underwater metal detector assists the search and recovery diver by enabling him to detect metal objects beneath any substrate under water. Usually, objects being sought have been silted over, or, in time, have settled into the soft bottom where they become obscured from view. Without the aid of a metal detector, the diver must physically probe the bottom using his hands to feel for objects. Depending on the size of an object, the metal detector can scan and detect deeply below the surface. Quite often, underwater evidence searches involve guns which can be easily detected by a metal detector. The recovery of evidence that may have been thrown in the water is critical to many investigations, and often leads to the apprehension of the perpetrator involved. An assignment to recover evidence is just one of the many tasks performed by an underwater search and recovery police diver.”

As modern technology advances the one thing that will always remain stable is the need for metal detectors and those talented individuals that use them every day. JW Fishers has been providing underwater search equipment across the globe for over 55 years and always have the “right tool for the job.”

For more on JW Fishers visit their website: http://www.jwfishers.com/products/handheld.html

Tags: jw fishers, metal detection, police,
Two weeks are better than one
How many clicks are too many?
Previous Post
Next Post
1 Comment Leave A Reply

One Response to “Recovering Evidence with Underwater Technology”

EXOSUIT: The Case For One – Atmosphere Diving

First Published in DIVER Volume 38 Issue 5 By Phil Nuytten The problem: A swillion, or so, years ago, we humans were designed (or evolved, or left here by …

The (not so) Silent World

Since fall 2018, NOAA and the US Navy have been working with a number of scientific partners to study sound within seven national marine sanctuaries Words by Rachel Plunkett …

The Dive Equipment and Marketing Association (DEMA) wants us to enjoy manatees but to be sure to give them their space. A poster and 30-second video, voiced by Jimmy …