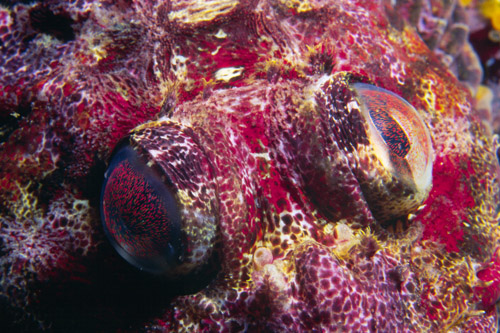 Ablaze with what appears the reflection of a dazzling fireworks display, the eyes of a Red Irish Lord (Hemilepidotus hemilepidotus) add to the brilliant colouration of this striking species of sculpin. Its typically vivid coat can vary from hues of orange through red to magenta and into striking pinks and purples.  Its mottled patterns are good camouflage, allowing the fish to blend with its surroundings, but as many west coast divers know they’re pretty easy to spot and even pick up, so confident are they in their ‘invisibility’. Their appearance and docile nature make them a favourite among underwater photographers.

That said the male boldly guards its eggs until they’re hatched during the winter spawning season. A relatively large intertidal fish growing to 20 inches (50cm) in length, the Red Irish Lord is found to depths of about 165 feet (50m) across a wide range from Siberia to Alaska, down the B.C. coast and all the way to central California. This was one of my earlier macro shots of the fish taken with what now seems like the ‘ancient’ Nikonos III camera, fitted with an extension tube for very tight close ups. All these years later, with thousands of dives and even more images later, I can rarely pass up the chance to photograph such an obliging riot of colour.

Photograph taken in Queen Charlotte Strait off the north coast of Vancouver Island, British Columbia, using a Nikonos III camera fitted with a 1:3 extension tube on a 35mm lens and a single Sea&Sea 120 strobe.  Exposure f/11 or f/16 at 1/60th of a second on Fujichrome 100 film. Photo © Dale Sanders – www.DaleSanders.info

Every autumn sockeye salmon (Oncorhynchus nerka) enter British Columbia’s Fraser River and battle their way hundreds of miles upstream to spawn in the big river’s countless tributaries.  Of these …