Two hundred billion gallons of foaming seawater swirl through Sechelt Rapids on each turn of the tide in this constricted, islet-strewn passage on Canada’s Pacific coast. In the aerial view to the northwest, looking from Sechelt Inlet toward Jervis Inlet, a 13.5 knot ebb roars through the shallow gap. On a really big exchange the peak velocity is 16 knots (that’s 18.4 mph, or for the metric-savvy 29.6 kph), making it the fastest navigable ocean channel on the west coast and arguably tops in the world. 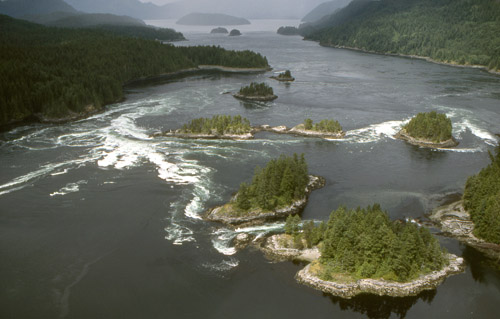 The powerful currents deliver copious amounts of planktonic food, so the marine life is exceedingly rich. But diving is obviously restricted to slack water, when the tidal currents briefly slow down and change direction. Carpets of colourful dahlia anemones (pictured), splotches of garish yellow and orange sponges, clusters of barnacles the size of softballs, hordes of spiny urchins, armies of five-rayed purple seastars, rare blue-clawed lithode crabs and lush gardens of golden kelp crowd the bottom. Oddly enough, there are plenty of fish too, especially sculpins, greenlings and rockfish that hunker down in caves and crevices when the current gets turbulent. When the winter visibility reaches 60 feet (18m) and small exchanges allow long excursions at slack, it is a stunner of a dive site. 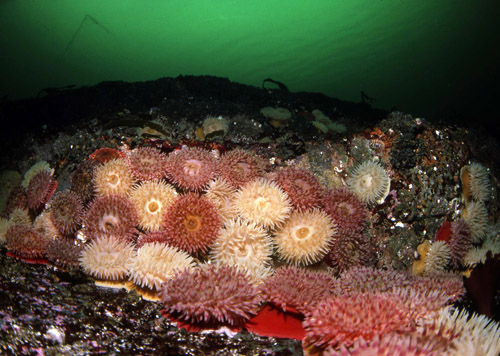 The awesome whirlpools and overfalls can be safely viewed from a rocky lookout by hiking the B.C. Parks trail that starts near the town of Egmont on the Sechelt Peninsula. Consult the Canadian Tide and Current Tables, Volume 5, to determine the best viewing times (look up Sechelt Rapids; any current velocity over 10 knots on the flood or ebb is impressive).

The Muskallonge or Muskie, as she is affectionately known in diving circles, is not so well known in her watery grave as she was in service on the Seaway. …

Winter diving weather along the British Columbia coast is not infrequently overcast but when the sun peaks through the clouds up there in the sky, divers can be rewarded …

The Ontario Underwater Council (OUC) held a successful fund raising evening at the Ontario Science Centre earlier this month. Although the holiday season is normally a difficult time to …