Every autumn sockeye salmon (Oncorhynchus nerka) enter British Columbia’s Fraser River and battle their way hundreds of miles upstream to spawn in the big river’s countless tributaries.  Of these the Adams River run is arguably the best known.  A dominant run occurs every four years and after several dismal years the 2010 run is in sharp contrast, proving to be one of the most abundant in recent history; estimates suggest up to 10 million salmon may have teemed through this small waterway that links Adams and Shuswap lakes. The sockeye’s brilliant red colour makes it the most striking and photogenic of the salmon struggling up river, against what seem impossible odds.  After spawning the fish die; their carcasses become food and nutrients for countless animal and plant species in the ecosystem. 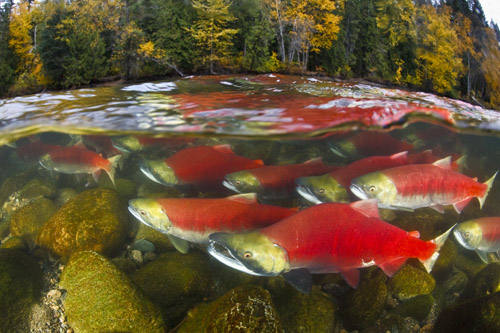 During the previous dominant run in the Adams River I spied these sockeye in a pool and slowly worked my way in close to shoot a few split-image photos contrasting the salmon with the autumn colours of the surrounding terrestrial world. They appeared unaffected by the river’s current, while I struggled to maintain my position, clad in bulky drysuit and grappling with heavy and awkward camera gear. After several hours in the cool water my arms ached so much I could barely crawl on to the beach. The fate of wild salmon stocks is unclear. The extraordinary resilience of the Adams River sockeye is another matter; clearly, there is much we can learn from these indefatigable fish. An important postscript to this story is that a permit is required from the Department of Fisheries and Oceans to photograph in the Adams River, but no permit is required to dive in Shuswap Lake at the mouth of the river where it’s possible to see the impressive schools of salmon as they continue up stream.

Photograph taken in the Adams River, British Columbia, under permit of the Department of Fisheries and Oceans, using a Canon EOS 5D with a 15mm fisheye lens in an Aquatica housing fitted with an eight-inch dome port. Fill flash from two Ikelite S200 strobes. Exposure f/11 at 1/100th of a second at ISO 400. Photo: © Dale Sanders – www.dalesanders.info

Warm vs Cold Water: The Differences for Freedivers

By Kirk Krack I’m often asked by students around the world if I freedive in British Columbia where I live, as most of my work and teaching is done …

Two hundred billion gallons of foaming seawater swirl through Sechelt Rapids on each turn of the tide in this constricted, islet-strewn passage on Canada’s Pacific coast. In the aerial …