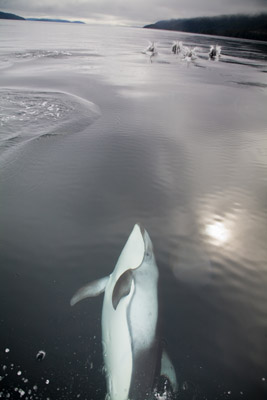 The Pacific white-sided dolphin (Lagenorhynchus oblquidens) is among the most social and playful of marine mammals in British Columbia waters.  During autumn large numbers of them often move into the Johnstone Strait, off the northern coast of Vancouver Island, where they feed on large schools of herring and pilchards passing through the region. This is also a good time to dive the rich marine environment here, with summer plankton blooms largely dissipated and visibility steadily improving. A chance encounter with these playful animals can be memorable. On this occasion we’d just finished a dive when a small pod of dolphins suddenly appeared out of the fog and began riding the bow wave of our boat.   They escorted us down the mist-shrouded strait, seeming to enjoy the experience as much as we did. Sometimes the whole strait appears alive with dolphins, as hundreds move through the weather-protected waterway. Strangely, the dolphins reappeared here in significant numbers only about 25 years ago. Overfishing of baitfish such as herring and pilchards may cause their presence to be short lived.

The last issue of 2013 has just rolled off the printers and it looks fantastic! Volume 39 Issue 1 will be hitting subscribers over the next week or two …