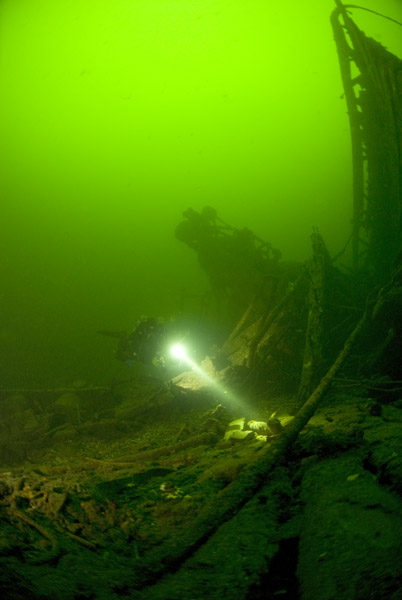 The Muskallonge or Muskie, as she is affectionately known in diving circles, is not so well known in her watery grave as she was in service on the Seaway. Then, she was touted as the largest tug on the Great Lakes. Built in 1896 at Port Huron, Michigan, she was 128 feet (40m) long and began life as the Vigilant. Acquired by Canadian interests in 1913, she became the Muskallonge, which anglers will tell you is the name of a fearsome freshwater fish. Just shy of 40 years on the job she caught fire and sank in almost 100 feet (30m) of water near Brockville, Ontario. Circumstances of the fire are unclear. At the time she was towing two other vessels, the tug Ajax and the barge Bruce Hudson. The captain acted quickly to cut the tow loose and ran Muskallonge aground. His crew reached safety but the tug was aflame through the night, eventually burning to the waterline. In time most of her remains drifted and settled on the bottom about 300 feet (90m) from shore, which, along with its depth, makes this hulk a boat dive. The dive site offers generally good visibility and manageable currents. Summer water temps can reach into the mid 70s Fahrenheit or about 24°C. Despite the fire damage, or maybe because of it, there is quite a bit to see on this wreck: a boiler, winches, her engine and various other artifacts, including some chinaware. Of course, there’s aquatic life to see through the main diving season and because this wreck is protected by the Save Our Shipwrecks (SOS) organization, there’s also a commemorative plaque for you to find on a dive.

Photograph taken in the St. Lawrence River near Brockville, Ontario, using a Nikon D200 with Nikkor 10.5mm lens in an Aquatica housing with 8-inch dome port. Fill flash from twin Ikelite SS200 strobes set at quarter power. Exposure f2.8 at 1/15 of a second.

A mid winter opportunity to dive Browning Pass in B.C.’s Queen Charlotte Strait delivered up cold February winds and rain… but when they abated and the sun came out we …

Words and Photo By Maxwel Hohn One of the most abundant fishes in BC’s coastal waters, Pacific herring are a keystone species for the marine food web and support a …

Text and Photograph by Eiko Jones   I first started shooting dogs in the water when Mortimer, a friendly pooch, came down to visit me photographing in the Campbell …