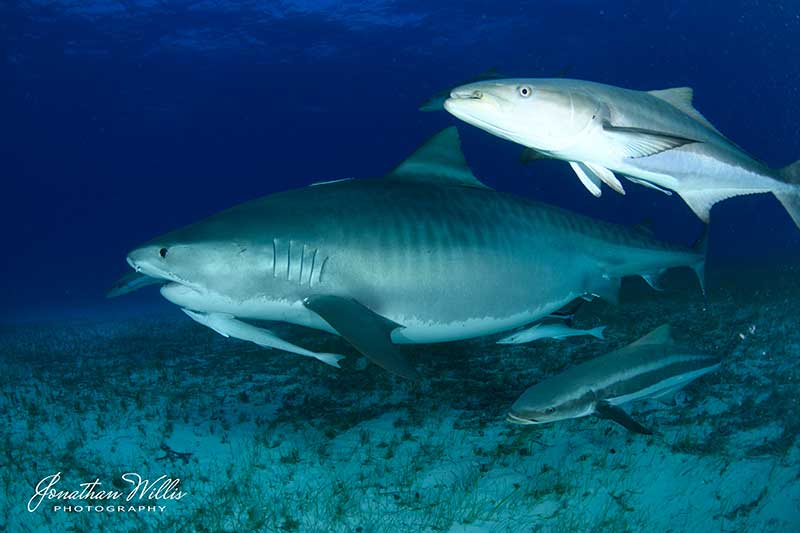 Multiple 12-foot, 1,500 pound tiger sharks approach us out of the blue, puppy-like, sniffing around looking for treats. This describes the scene at a well-known dive site called Tiger Beach, near West End, Grand Bahama Island, where I spent several days attempting to learn all that I could about these legendary leviathans of the deep. They were all around us, coming up to check out each diver individually, mere inches from our face masks, almost as if they were saying hello, more likely sizing each one of us up. “Just a normal day at the beach” exclaimed one of the divers that had been here over 20 times, after the dives, later on the boat. With its flat, sandy bottom, clear blue gulfstream fed water and shallow 20 foot depths, somehow this place has become home to some of the world’s most astonishing animals. Tiger Beach is a place to behold. You won’t find any colorful umbrellas, sandcastles, or lifeguards here.

My dad, an accomplished diver and underwater videographer, had experienced the wonders of the beach several times years earlier while I was still a toddler, and had amazing adventures he wanted to share with me.  We booked a trip during spring break of my 8th grade year, but unfortunately could not go because of the pandemic. Before I turned 15 (I was a high school freshman), my dad and I headed off to Grand Bahama.

Before arriving, we met up on the transfer flight with diver extraordinaire and professional underwater photographer Andy Sallmon. He helped me immensely throughout our trip with all things related to underwater photography, and then some. We got in a little after 2 pm, and the rest of the day was spent getting camera gear ready: putting our housings together, charging batteries, greasing the O rings, and making sure everything worked. For breakfast the next day and throughout the week, I was introduced to a world class cooking technique called Man-Way (created by Andy). To minimize cleanup and maximize flavor, we would use one frying pan for the entire breakfast, including my own, my dad’s, and Andy’s meals.

Unfortunately, our first and 2nd days scheduled for Tiger Beach were canceled due to strong winds and high seas.   Nevertheless, we adapted, having a plan for these foul weather days. Andy hosted several classes, teaching us different rules of underwater photography. We learned about the “10% Rule” where you only shoot within 10% of the visibility:  if the visibility is 20 feet, only shoot objects within two feet of your camera.   We learned about the “X-Rule”:  X = X; X, the distance between your strobes should equal X, the distance from your camera to the subject. We learned about light in the water column and how the red, orange and yellow wavelengths of light are lost in the shallow 20 to 30 feet of the water that we were diving. Also, we were taught that seawater is 800 times denser than air, so light speed slows when passing through this medium, and when light passes through a face mask, it gets refracted, or bent, allowing big tiger sharks to appear 25% larger and closer. In addition to these priceless photography classes, we got in the water to do practice dives in the marina since there were no boats there. We were lucky enough to find three rarely seen short nosed bat fish in just 6 feet depth., doing these easy dives in very shallow water were a needed refresher, especially after 2 long years away from diving during COVID. 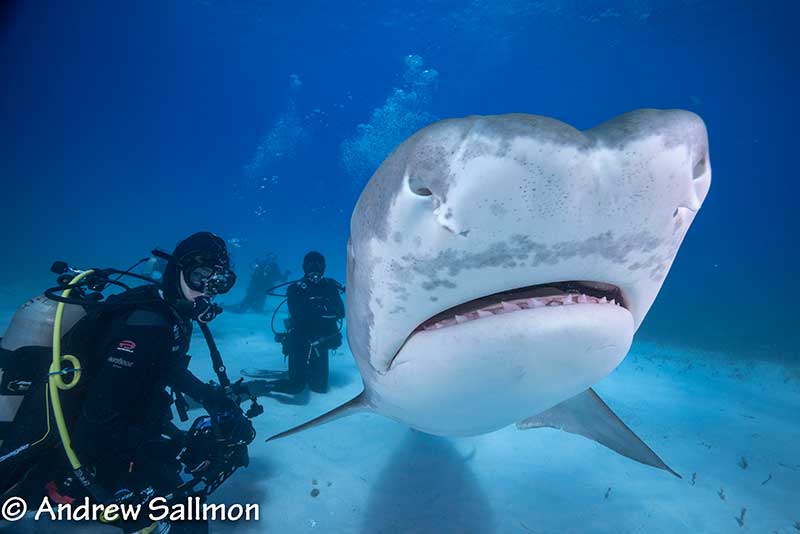 The weather was much better by the third day, and we were finally able to get out on the water. The team we were diving with was Epic Diving: Deborah and Vincent Cannabal. Most couples have a dog or cat or even aquarium fish as pets. Not these guys.  Their pets are wild tiger sharks!

The boat ride to Tiger Beach was about two hours, and along the way, we were prepped by Deborah and Vince on the do’s and don’ts while underwater with these amazing creatures. We arrived at the beach and started chumming to bring the sharks to us. Immediately, big lemon sharks gathered around the surface, patiently waiting.   We put on our wet suits and prepared the rest of our dive and camera equipment, anticipating the tiger sharks’ arrival.

When they appeared, Vince got in the water to check if the coast was clear. We followed, jumping through a pile of lemon sharks (10-20 of them).  With extra weight in our BCDs, we were able to descend quickly and stay there without having to worry about current. We all safely reached the bottom and arranged in a V shape. Vince was in the front, with two people at each side. The sharks would approach Vince head on with his bait box, possibly getting a fish, and split to one side or the other to visit us. Then they would pass us and circle back around again. We always had to keep an eye on the closest shark, especially if it was behind one of us, while also being aware of the other tigers in the area. Seeing these massive sharks up close was another worldly experience. These tanks would cruise effortlessly up to you with their wide heads and bulky bodies. Sometimes you would get lucky (depending upon who you asked) and the shark would bite your camera. Mostly though, they would swim up to you, bump your Dome port, and be on their way. The day passed really quickly, and we came up only for a new tank of air and to eat lunch (Was anyone hungry?). Late afternoon, we packed up and left the dive site, riding home while watching the sunset. 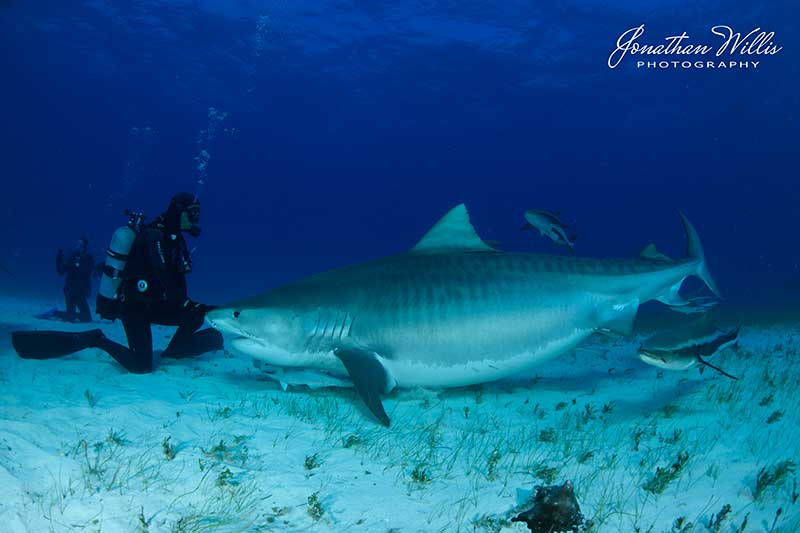 We arrived at the marina just before dark, exhausted, with still much work ahead of us: first, we rinsed off all our gear with fresh water. As soon as we got to the condo, we took our cameras out of our housing, put all the batteries on charge, and checked our memory cards and housings.  We reflected on the incredible adventures of our day.  The following 2 days were very similar, striving for great pictures and enjoying our peaceful time in the water with the sharks.

On our final day, we arrived at the dive spot a little later due to rougher seas. The water clarity was not the best from the surface, but nevertheless, we still hoped to see some tiger sharks. Jumping into the water and swimming down to the group of tigers was a completely different experience than the past two days. On the bottom, the visibility was around 15 ft:  it looked like it was snowing underwater. To make things more interesting, we had eight big tiger sharks all around us, and they used this murky water to their advantage. Your head had to be on a swivel, as they were popping out from every angle, abandoning their typical head on approach. It was quite a dive, and thankfully, we all made it out with intact limbs and some great photos.

The trip was an amazing experience, and one I will never forget. Swimming with these large oceanic predators, in the wild and interacting with them was sometimes intense, yet very special all the same. They are far from the man-eating monsters portrayed in Hollywood, actually somewhat shy and definitely peaceful creatures. We used a lot of bait to attract them otherwise I doubt they’d have come around us. They all have separate personalities and physical traits that we used to identify them, making each one unique. As long as we were cautious and alert in the water, we had nothing to fear. I gained so much from this trip, particularly an appreciation for these incredible animals, and I hope to revisit them again.

Though modest in appearance and size, this food chain favourite is at the centre of a continuum oceanic in its scale and unforgiving in its nature. Text and Photography …

The rough and tumble of diving increases risk of bone fractures By Dr. David Sawatzky Osteoporosis is a very common bone disease that increases the risk of fractures and …