The Hazards of Freediving

Let’s clear the air –
You can get bent while breath hold diving.

Sam Espinosa parked his battered pickup truck full of yellowfin grouper, snapper and a smattering of big pelagic fish in front of my office and, with obvious difficulty, climbed the front walk. He presented himself with progressive symptoms including limb pain, patchy areas of numbness and tingling, along with exceptional fatigue and severe headache. He told me that he and his brother had been spearfishing from early morning until just before sundown in depths up to 125 feet (38m).

He noticed the pain symptoms around mid-afternoon, but attributed them to the rigors of his work wrestling large fish to the surface, so he continued his dive activities. Both men had clearly identifiable decompression sickness (DCS) symptomatology and I started them on demand valve 100 percent oxygen and aggressive fluids. Arrangements were made to evacuate them from St. Croix to a recompression chamber off island.

So, you’re likely thinking big deal, deep repetitive dives with a heavy exertion component. Is there any surprise that these guys got bent? Right on all counts, but these men were not SCUBA diving. They were professional commercial fishermen who did all their hunting by free diving – holding their breath. This was 1973 and until then I’d never seen a case of freediving DCS. In fact, like most divers and chamber staff of that era, we had never even given much serious consideration to that possibility. As the local spearfishermen were to prove with uncanny regularity over the next few years, we were naive in our preliminary skepticism.

Both of these men recovered completely and they kindled my interest in freediving-induced DCS, for professional and personal reasons. Most Virgin Islands’ health professionals had dismissed any physiological threat of DCS to breath hold divers as impossible and were more inclined to catalog such presentations as traditional muscle strains or carbon dioxide related brain phenomena.

During this same time in the early 1970s, I was involved with some of the best freedivers in the Caribbean. They competed in spearfishing contests where depths could range from 60 feet (18m) over typical reef bottoms to hunting along drop-off walls where 150-foot (46m) dives would occasionally be made.

Following my experience with the Espinosa brothers, several of us experimented during prolonged diving days wearing the old Scubapro/SOS deco meter. We got some interesting results. Many of us were able to advance the unit’s analog needle almost into the ‘red zone’, indicating required decompression. And our diving routine was far less demanding than the local ‘pros’ who typically dove more frequently per hour and for longer bottom times at the deeper depth. If we’d had the luxury of using modern dive computers with their more conservative decompression models, we’d almost certainly have incurred penalties, requiring stops or ‘ceilings’ as the day progressed.

So can you get bent breath hold diving? Most divers would answer ‘no’. But there is no requirement that you breathe compressed air from a scuba tank to manifest DCS. The malady is dependent on time and depth primarily, and therefore expert breath hold divers can, in exceptional diving circumstances, place themselves within a window of vulnerability.

Competitive spearfishermen, South Pacific islander working freedivers and Japanese Ama divers are most at risk. Typically, these divers can attain relatively deep depths, 80 to 130 feet (25-40m) for up to three minutes bottom time. Their profiles reflect an average to rapid descent followed by a ‘working’ period at depth. Ascents are rapid, sometimes assisted by buoyant apparatus. Considerable exertion may be expended on the dive if the diver must struggle to land a large fish or to swim objects off the bottom. The new generation of competitive free divers can go far deeper especially when clinging to descent sleds. And although their exertion levels are lower, the intake of inert gas due to depth and subsequent rapid buoyant ascent pose unique risks for DCS.

Early on, little serious consideration was given the likelihood of a freediver suffering a bends hit, but Bob Croft’s dramatic dive to 240 feet (73m) in 1968 prompted some discussion. Dives exceeding four minutes had already been recorded and anecdotal accounts of longer breath hold dives were in circulation. A 1962 National Geographic article recounts the diving style of a South Pacific diver: “A man from the Tuamotos who at 59 years old went to 100 feet (30m) as many as 50 times a day summed up his attitude toward this skill. ‘It is nothing… I have big lungs and a strong body. It is my work’. Two minutes, three, four…a long time if you are holding your breath, but what if you are trying to follow a fish?”

Surprisingly, no correlation between deep breath hold dives and symptomatic DCS was made in many cases. In National Geographic’s 1980 book Exploring the Deep Frontier the authors relate, “Oxygen deprivation much longer (than four minutes)… can be damaging or fatal. In the Tuamotos, those who make successive, lengthy dives to great depths, risk a condition they call taravana, a sickness that includes vertigo, nausea, partial or complete paralysis, and unconsciousness.” Don’t these symptoms have something of familiar ring to them? A quick glance through any DCS symptom list should provide some easy match-ups.

Admittedly, it takes an exceptional diver to get bent holding his or her breath, but it does happen. Readers are cautioned about deep breath hold diving following aggressive SCUBA diving activities. Dive instructor Scott Valerga of Virgin Gorda had made repetitive SCUBA dives in 1978 while taking tourist divers on SCUBA tours. When he was unable to free his anchor following the last dive, he made several dives to 90 feet (27m) holding his breath to break out the anchor. Within minutes after getting back on board, he was symptomatic of DCS. His previous diving schedule was within the limits of the Navy tables but with little safety margin. He was treated in the St. Croix recompression chamber operated by the National Oceanic and Atmospheric Administration’s (NOAA’s) Hydrolab facility with full recovery. 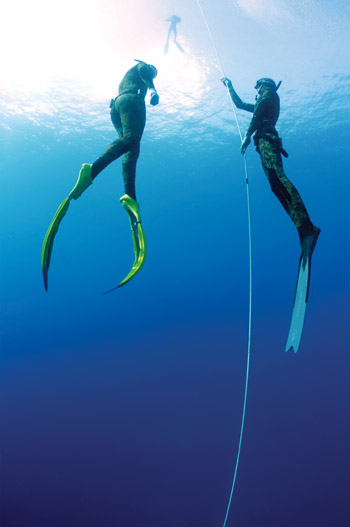 Although it’s unlikely that average divers will be placed at much risk from their free diving skills, the combination of aggressive repetitive SCUBA diving over several days in resort or live-aboard situations, in combination with breath hold dives below 60 feet (18m), could spell trouble for those capable of performing at this level. Forewarned is forearmed!

While you can’t get in trouble with lung over-expansion injuries from breath hold diving (unless you were to take a breath from a compressed air source while already underwater from a diver’s regulator, Spare Air, etc.), there is another serious hazard to consider that deals with the consequences of excessive hyperventilation and the relationships of oxygen and carbon dioxide.

Most divers are familiar with the basic characteristics of oxygen as it occurs in our atmosphere.  It is a colourless, odorless and tasteless gas found free in dry air at 23.15 percent by weight and 20.98 percent  by volume.  For discussion purposes, we’ll consider its volume percentage to be 21 percent. At the surface we’re naturally adapted to this partial pressure, expressed as PO2 at .21 atmospheres absolute (ATA).  This is considered the reference point for ‘normoxic’ conditions.

It is important to be aware of certain ranges of tolerance in normal, healthy persons.  Most people can maintain proper blood oxygenation down to .16 ATA (16 percent oxygen in the mix at surface pressure) but dropping much below this will limit performance/endurance and unconsciousness will likely result approaching .1 ATA (10 percent oxygen at the surface).

You may recall the old reference to the ‘Ten and Ten Rule’ that proposes blackout will occur if the percentage of either oxygen or carbon dioxide (CO2) reaches 10 percent in the gas mixture.  This was particularly important to competitive free divers and spearfishers holding their breath to depths in excess of 80 to 100 feet (24-30m). Many of them could dive far deeper and extend time underwater employing disciplines of hyperventilation and adaptation, in tandem with techniques that precipitate what we call the mammalian diving reflex.

However, this practice is a double-edged sword; as depth-increased CO2 is produced by the body’s metabolism, the original ‘O2 storage’ achieved by hyperventilation is depleted (in the absence of any other source). To a certain degree, the inherent risk is counterbalanced by a corresponding rise in the percentage of carbon dioxide (PCO2) in the system, since this gas is a metabolic waste product as oxygen is burned.

At some point, the diver passes out from this ‘latent hypoxia’ syndrome or what’s commonly known as ‘shallow water black out’. Typically the diver shows no signs or distress and simply goes limp, sometimes within 10 feet (3m) of the surface. Those successfully rescued and revived say there’s no warning of the impending blackout or any major stimulus to breathe. But several fatalities occurred before these problems were identified and the hazards of deep breath-hold diving were well communicated.

The recreational snorkeler  splashing about enjoying the sights on a shallow reef can still sleep soundly. But as the popularity of freediving and more advanced applications such as spearfishing or competition attracts more divers to this purest form of underwater exploration, an awareness of these potential hazards is necessary.

Just when you thought it was safe to go back in the water….

Bret Gilliam is a 43-year veteran of the professional diving industry and was an member of the Virgin Islands’ 1974 World Championship Spearfishing Team, where he won individual honors for largest fish taken free-diving at 125-foot (38m) depths.

One Response to “The Hazards of Freediving”

Words By Steve Lewis Even if you’re a cold-water diver, there’s a strong case to be made for doing your next advanced diver training in warm water (read tropical …

DIVER salutes Ron Taylor, diver, pioneer underwater filmmaker and champion of our ocean world Read tributes below and add yours to the comments The world diving community has lost …

Can diving benefit the health of breast cancer survivors?

Project Pink Tank is on a mission to get to the bottom of it. Text by Lisa Sonne More than 400 scuba enthusiasts, including open water, advanced, technical, and …