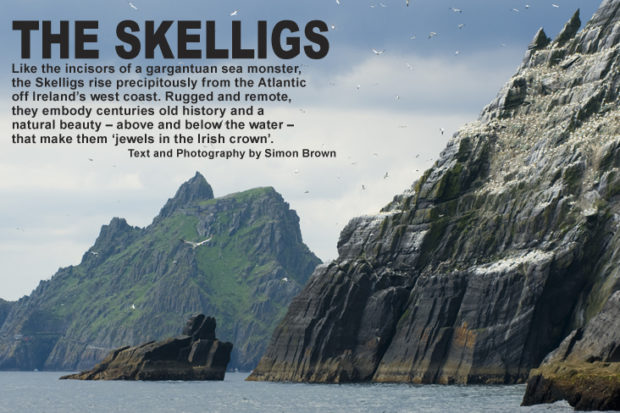 From a depth of 105 feet (32m) the surface shimmered in light. The vista was stunningly clear, an expansive panorama washed in a watercolour blue that recalled diving somewhere decidedly warmer. Before me there were bold swaths of colour so richly saturated they seemed more psychedelic than from the real world; a ragged pinnacle blending the vibrant colours of a Rothko painting with the whimsy of something akin to a Salvador Dali sculpture. The pinnacle was immense, reaching up from my knees at its base to within 40 feet (12m) of the surface.

This was Mother Nature at her finest – the tie-dye colours rampant colonies of jewel anemones. The essential dry suit I was wearing and my dive computer readout at 50ºF (10ºC), were real enough reminders that this was the north Atlantic and not the bathtub warm equatorial waters far to the south.

I’d found this temperate sea beauty off the west coast of Ireland around the Skellig Islands in County Kerry. Arguably, this is the place to dive in North Western Europe. The Skelligs comprise two major islands – Skellig Michael and Little Skellig. They are designated a World Heritage site, thanks mainly to a preserved 6th Century monastic settlement at the top of

Skellig Michael, which is popular with tourists willing to climb the 550 steps from a small landing bay to a breathtaking look-off.

Little Skellig is a wonder in its own right. During the breeding season an estimated 100,000 gannets, razorbills and common guillemots use Little Skellig as a nesting grounds to lay eggs and raise their young.

From afar, the two islands are impossible to confuse; Skellig Michael is tinged green and Little Skellig is streaked almost pure white with guano from the bird colonies. When the boat gets in close, the islands smell differently too…and the squark-squark seabird chatter is so deafening it drowns out any attempt at conversation.

At this point I feel compelled to offer a couple of handy tips should you find yourself in close proximity to Little Skellig. Firstly, when looking up, do not open your mouth in awe and wonder. Not all the guano hits the island. Secondly, when returning from a dive it’s a good idea to swim to the boat ladder underwater. Often there is a slick of guano, muck and feathers on the surface and neither you nor your boat mates will appreciate your smelly dive gear on deck.

Above the waves the Skelligs are stunning but few of the day-trippers visiting the island imagine the topside beauty extends beneath the waves. The steep, terraced terrain descends into the deep, forming sheer walls with narrow ledges that plunge well beyond the range of sport diving.  It’s this vertical world that really gives scuba addicts their fix.

From the surface to around 65 feet (20m), kelp dominates the seascape, thriving in these nutrient-rich sunlit waters. But the acid trip carnival of colours I’ve mentioned, the visual rush that makes this location so special, starts below the kelp. Sean, our boat skipper and owner of Ballinskellig Watersports, always put us on a good spot but I hunch just about anywhere around these islands offers up an ecosystem that, comparatively, appears like it’s on steroids. Marine life is the main event here – it’s prolific beyond description. If it’s wrecks your after, head for Scapa Flow. Along this wild and wooley open ocean coast, steel structures – pretty much anything manmade – gets flattened inside of one winter, after which you can come and collect the scrap metal that remains.

You need to be adept at buoyancy control diving the Skelligs, for two reasons. As I’ve said, the walls are precipitous, dropping into very deep water, and the eye is easily fooled by the excellent visibility. It’s easy to end up much deeper than you’d planned. The other buoyancy control concern is about preserving the amazing marine life that makes the Skelligs so special. There’s precious little bare rock at many sites here and sandy patches to kneel on are also scarce.

The Skelligs offer visual drama on a grand scale. But it’s worth slowing down and taking in the macro world, which is truly abundant in these waters. You’ll find so much beauty in the detail that it’s easy to spend an entire dive in one spot. And I recommend this if you’re going to be diving the Skelligs for a few days.

It’s illegal for scuba divers to take shellfish in Ireland. Some like to sneak one for the pot, but not here and the benefit to the local shellfish population is apparent. During one dive under the old lighthouse on Skellig Michael I counted eight large crayfish, each too big to climb into a fisherman’s ‘pot’ or trap. In all my years of diving in U.K. waters I’d not once seen a crayfish, much less the prize specimens living in this neighbourhood. To see one was a treat, to see so many was a confirmation that conservation works.

The apex predators here are the seals. Larger adults and juveniles are often seen resting on the rocks and it’s not unusual to be checked out by these delightful mammals during your dive. On one occasion a playful pup hooked up with us. Adults tend to keep their distance, but this youngster would sneak up on my buddy and chomp down on his fins, then in a flash, shoot back into the kelp when eye contact was made. Another game was ‘ambush the macro photographer’, the objective of which appeared to be preventing the diver from getting his shot by well timed and persistent tugs on the biped’s fins…

US gear manufacturer Hollis, have announced a partnership with Canada’s Sea the World Adventure Travel, with their first expedition to Truk Lagoon now taking bookings for 2016.  Divers will get the chance …

Aggressor Adventures, known for its thrilling adventure vacations for guests around the world with 40 unique itineraries in 19 countries, is celebrating its 38th anniversary! While much has changed …

Though modest in appearance and size, this food chain favourite is at the centre of a continuum oceanic in its scale and unforgiving in its nature. Text and Photography …