Adopt a coral during lockdown & help protect our oceans 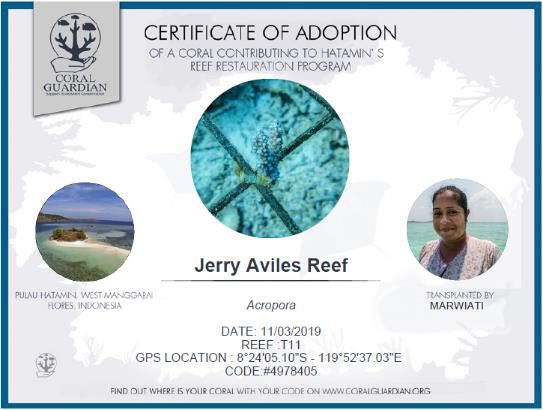 French non-profit organization Coral Guardian’s restoration actions have not been affected during lockdown, and they’re asking people around the globe to take this time to think about our oceans and act by adopting a coral.

By adopting a coral for €30 on their website, Coral Guardian transplants your coral on coral reefs that have been previously destroyed due to global warming and human activities. The coral fragments are always indigenous species so as not to disturb the local ecosystem.

Thanks to sponsor actions, these reefs come back to life and biodiversity can settle there again. By adopting a coral, you receive a personalised adoption certificate with its GPS coordinates, a photograph, the name you have chosen for the coral and a photograph of the person who transplanted it. Adopting a coral is more than just a present for your friends, family and for oceans in general; it is also a gift to local communities that depend on these ecosystems to live.

Appearing as solitary forms in the fossil record more than 400 million years ago, corals are extremely ancient animals that evolved into modern reef-building forms over the last 25 million years. Coral reefs are unique (e.g., the largest structures on earth of biological origin) and complex systems. Rivaling old growth forests in longevity of their ecological communities, well-developed reefs reflect thousands of years of history.

We help develop the biodiversity of marine ecosystems in Indonesia, protecting and repopulating damaged reef areas through coral reefs conservation programs such as coral reef restoration projects. Thanks to the construction of unique artificial reefs, dedicated to the rehabilitation of coral reefs in damaged areas, we make possible the return of lost biodiversity in this environment. The reef-building corals are real carbon sink, giving the project a global scale, allowing the reduction of the concentration of atmospheric carbon dioxide present.

Coral Garden are currently restoring the damaged reefs of Hatamin Island near the village of Seraya Besar in Indonesia. 37,000 corals have already been transplanted thanks to this initiative, allowing this village of 750 inhabitants to continue to make a living from fishing.
The approach in 4 steps:

Tags:
The Cayman Islands – 3 Islands to explore but each so different!
Back on Bonaire: Rediscovering Diver’s Paradise as a Father
Previous Post
Next Post
0 Comments Leave A Reply

24 Hours Worth of Fresh Video Ideas

By Jill Heinerth One of my favourite video sequences of all time was orchestrated by acclaimed adventure filmmaker Adam Ravetch. In 2012, he was in the Arctic filming Polar Bears: A Summer Odyssey, …

By Michael Menduno One of the world’s most iconic shipwrecks, the wreck of the SS Andrea Doria—located 110 nautical miles (200km) east of Montauk, New York and dubbed the …