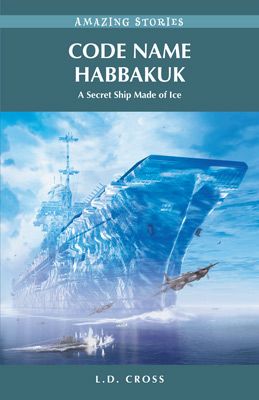 Even during the desperate early years of the Second World War the Habbakuk ice ship project was a stretch.  So when I read of Winston Churchill’s enthusiasm for a massive aircraft carrier made of ice to combat the German U-boat threat I figured the British Prime Minister was smoking doobies, not cigars. But superior technology wins wars and who the hell am I to second-guess a man of Churchill’s stature.

This top-secret project has to rank as one of the strangest Allied undertakings of that hard fought conflict and I expect why Heritage House has just published the yarn as part of its Amazing Stories series.

An eccentric scientist conceived the idea and there’s an amusing anecdote in the book of Lord Louis Mountbatten marching in on Churchill in his bathtub to demonstrate the superior quality of ‘pykrete’ versus natural ice, which is explained in our story.

Farfetched as it sounds an ice ship was just one of many weapons technologies proposed to beat Hitler. Midget subs, bouncing bombs and oil pipelines beneath the English Channel were among others. Many seemingly odd but innovative ideas were realized and helped the Allied victory thanks to ingenuity and those who believed in the power of pushing limits.

Churchill became a strong proponent of the ice ship concept urging its development. Originally it was thought great slabs of ice could be cut from floes or glaciers but as investigations advanced it became clear a more practical approach would be to fabricate a vessel using ice blocks and this gave rise to the formulation of pykrete, which was shown to be much more resilient to gun fire and, ice ship believers hoped, impervious to assault by bombs, torpedoes and the like.

Not everyone was convinced. Canadian Prime Minister Mackenzie King wrote in his diary that the plan was, “another of those mad, wild schemes that started with a couple of crazy men in England.” This is a story of technology and of people: scientists, politicians, military men and even conscientious objectors who were enlisted to build the scale model prototype on a remote Alberta lake far from the prying eyes of Axis spies.

Author L.D. Cross, an Ottawa-based writer, has nicely captured the mood of the time and of the many characters that bring this implausible story to life. It’s an engaging read and one that lends support to the old maxim that truth is stranger than fiction.

In the end, as Cross writes, “a great amount of innovative thinking and precise testing was directed at the ice ship concept…. the death of which was determined by strategic, technical and economic considerations.”

Divers found remains of the ice ship prototype in the 1970s and today it remains to be seen on the bottom of Patricia Lake in Canada’s Rocky Mountains for all wreck divers looking for a truly unusual entry for their logbooks.

A little help from our friends!

It’s not every day the release of a shiny new issue coincides with a dive trip attended by multiple DIVER contributors. A recent trip to dive the Bell Island …