Ask a rebreather diver what drives their rebreather and they will undoubtedly tell you, the oxygen sensors. These annually disposable devices are critical to creating a safe breathing loop and yet when not functioning properly can reduce a $10,000 investment in life support to a useless hulk of unusable equipment. Oxygen sensors are a crucial component, informing the rebreather control systems about the partial pressure of oxygen within the breathing loop. They notify the electronics package when solenoid should fire and send more life giving oxygen into a diver’s breathing loop and alert the computer system when too much oxygen could cause a toxicity seizure that might result in drowning.

Oxygen sensors are galvanic fuel cells that were originally devised for applications within the medical and automotive industry. Inside these relatively inexpensive devices, a chemical reaction is produced when the potassium hydroxide in the cell comes into contact with oxygen. This creates an electric current between a lead anode and gold-plated cathode through a load resistance. The current produced is proportional to the concentration (partial pressure) of oxygen present on the cell’s membrane.

The problem with using galvanic oxygen sensors within diving applications is that we treat them to very harsh conditions. They get exposed to great ranges in temperature, mechanical shock from transportation and they slowly degrade in a way that causes them fail from the top down in a rather unpredictable fashion. Worse yet, we calibrate oxygen sensors in pure oxygen at ambient pressure and then ask them provide reliable data at partial pressures up to 1.6 and beyond while getting wet inside a diver’s CCR. The distrust in electro-galvanic sensors is so great, that we put three or more in a rebreather so that voting logic can help to validate their readings or inform the diver when an abort is necessary. 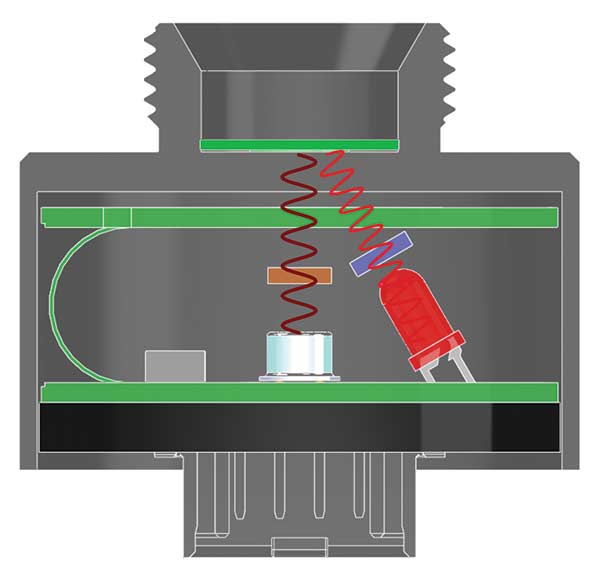 After 5 years of extensive R&D testing and design iterations, Poseidon Diving Systems AB of Sweden announced a revolution to the diving industry. They released the first solid state oxygen sensor at the TekDiveUSA Show in Miami in late April. This long-awaited breakthrough will undoubtedly change the diving industry by dramatically increasing the safety of rebreathers. This factory-calibrated sensor provides an accurate and highly reliable digital output, meaning that it can be permanently installed in a rebreather. There will be no need for user calibration. They will not expire and will provide a dependable reading under the unique conditions of the diving environment.

The solid state sensor uses special luminescent dyes, which are excited with red light. This oxygen dependent glow is detected in the range of near infrared light (NIR). Optical filters read the colour pigments on the membrane and with the help of a temperature sensor, reliably translate that information into a reading on the diver’s handset. Compared to today’s galvanic oxygen sensors, these new solid state sensors show unsurpassed shelf life, operational life time and calibration stability. “The diving community has waited for many years for a sensor like this and the Solid State Sensor is considered as one of the ‘holy grails’ of diving,” says Jonas Brandt CEO, Poseidon Diving Systems AB.

Poseidon paired their announcement with the release of their new M28 computer. This wrist-mounted platform offers a robust new graphical interface that feels like the cockpit of an airplane, but more importantly provides the diver with a way to view maps, surface GPS tracking and photos through its 32 GB memory. Coupled with the new solid state sensor, it can be attached to the breathing loop of many rebreathers and provide reliable oxygen readout. Both technologies will be integrated into Poseidon’s current and future life support systems, but the good news is that it appears that the M28 will be available in June 2016 with the sensors following later in the year.

Women Divers Deck the Halls Six new members were inducted into the prestigious Women Divers Hall of Fame on March 29 at the Beneath the Sea Awards Banquet. Barbara …

How to Choose a Video Light

By Jill Heinerth I have a confession: I have a bit of a light fetish. I can’t seem to stop buying new lights. Headlamps, solar rechargeable, hand-cranked lanterns, cinema …

By Roger Lacasse The Düsseldorf international boat show held its 51st edition in January. Simply known as the “boot” (German for, and pronounced like, boat), this nine-day event is …