A Good Schott at the Emmy’s 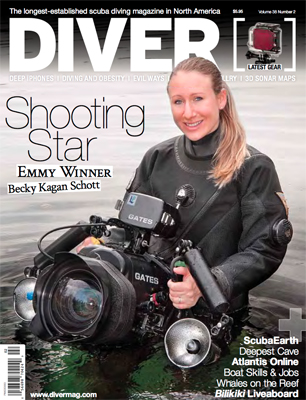 You should recognise Becky Kagan Schott from the cover of DIVER magazine just over a year ago (Volume 38 issue 2). The young professional’s career in underwater videography filled a very popular, 8 page feature that you can read, right here.

The 38th Annual, Suncoast Emmy Award Show in Florida, celebrates the best and brightest television and media professionals from the region. Becky and David Schott are hardly newcomers to the Emmy’s, their company Liquid Productions has earned its place as one of North America’s most prominent and respected underwater production companies. You’ve seen their work, even if you don’t realise it, with a list of credits that includes Nat Geo, Discovery, NBC and CBS.

Competing against a very long list of nominees, Becky Kagan Schott and David Schott received Emmy’s for their work on A Christmas Day Tragedy – Featured News Report, Cave Diving: Beyond the Limits – News Special Feature, and Promotional Single Spot. As well as a well earned Emmy for Technical Achievement, a testament to their skill and dedication when capturing quality video, under extreme conditions.

Not content with a monumentally successful night at the Emmy’s, Becky and David have a year ahead that looks set to push them further into the limelight.

Becky and David are fun, humble and skilled divers doing fantastic work, helping diving gain attention in a responsible manner. DIVER would like to congratulate Becky Kagan Schott and David Schott for their Emmy wins, and wish them the best of luck for future endeavours. Who knows, maybe even another cover?!

They’re work on Cave Diving: Beyond The Limit can be found by visiting CBS Miami.

Text and Photography by Jill Heinerth Originally published in Volume 40, issue 7. Click here to subscribe. Pioneering Scuba diver Marjorie Bank never made it to my age. She died prematurely, …