Genny Simard, interpreter at the Fundy Discovery Aquarium in St. Andrews, New Brunswick, holds Big Dee-Dee, a 22-pound (10kg) lobster (Homarus americanus) caught three years ago in the adjacent waters of the Bay of Fundy. A part of the Huntsman Marine Science Centre, the public aquarium is Canada’s newest and home to a variety of local species, including several rare lobsters. Though the Huntsman has operated an aquarium on its site since 1972, the new, rebuilt facility, complete with labs, a theatre and meeting rooms, just opened in September.

The lobster habitat includes the 35-year-old Big Dee-Dee; a yellow lobster, Fiona; and a blue lobster, Lily. All of these unusual lobsters were donated and, having been spared the cooking pot, enjoyed their 15 minutes of fame in the media spotlight worldwide. 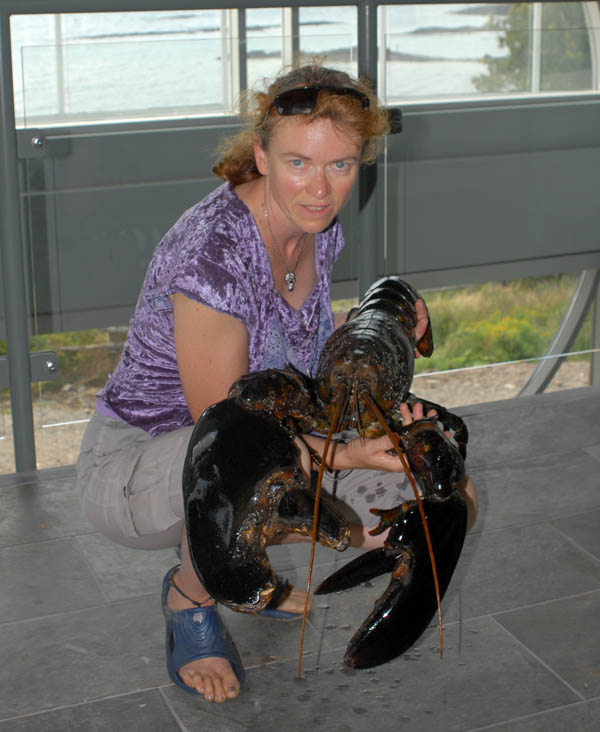 Big Dee-Dee, named for Denis the fishmonger who found him, has been at the aquarium for three years and is expected to molt in the next two years. At his age and size, he will molt only every four to five years, but when he does it’s quite possible he could increase his weight and size by as much as 50 per cent. That’s still far off the record, a 44 pounder (20kg) caught off Nova Scotia.

Lobsters actually molt several times while still in the egg, and then go through four stages before they resemble adult lobsters, at which point they settle on the ocean bottom and look for a home. The little guy shown posing on a caretaker’s finger is one year old. The molting process is quick, occurring in a matter of hours. The lobster will then eat much of the old shell for the nutrients. But hardening up the new shell takes a couple of weeks, a time when the crustacean is vulnerable. Females mate only after they have molted.

The Huntsman is home to two large lobsters, by chance both the same weight. As well the facility has two blue lobsters (about one in two million are this colour); two yellow (one in 30 million); a calico lobster, and several baby lobsters that were grown from eggs. These fascinating crustaceans have inspired many books, thanks to their incredible biology, and they play their part attracting the 50,000 visitors welcomed by the aquarium each year. For more info go to www.huntsmanmarine.ca

Between the Canadian provinces of New Brunswick and Nova Scotia, the Bay of Fundy is a natural wonder as home to the world’s highest tides, which range by location from 11 feet to an incredible 53 feet (3.5-16m). Its marine biodiversity has been compared to the Amazon Rainforest. The Bay is the summer feeding area for half the world’s population of endangered North Atlantic Right whales and 12 other whale species. It is home to the world’s most complete fossil record of the ‘Coal Age’ (300 million years ago) as well as Canada’s oldest dinosaurs. The Bay of Fundy is home to two UNESCO Biosphere Reserves.

Words and Photos by Eduardo Baena Located on Highway 99, halfway between the towns of Lillooet and Cache Creek, British Columbia’s Pavilion Lake offers a unique opportunity to observe …

Text and Photo by Andy Murch One of the favourite games played by adolescent Steller sea lions is ‘sneak up on the scuba diver’. This gang of juveniles …