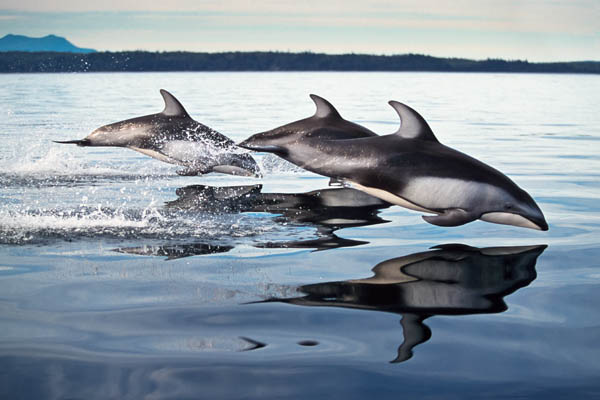 Perfectly ‘synched’, these Pacific White-Sided Dolphins (Lagenorhynchus oblquidens) gracefully paced our boat as we motored across Blackfish Sound near Port McNeil on Vancouver Island’s rugged north coast. These playful and social marine mammals are a favorite in British Columbia’s Emerald Sea, and encounters such as this are among the many reasons I keep coming back to dive the rich, current swept islands of the region. During autumn large numbers of these dolphins arrive to feed on the schools of herring and pilchards, or Pacific sardine, that have returned to these fertile waters after heavy fishing all but cleaned them out in the early twentieth century. The dolphins’ reappearance here is likely because this prime food source has made a comeback. In winter and spring they seem to split into smaller groups to feed in the fiords and inside waters.

Several hundreds of dolphins can be swimming together and if you’re lucky enough to encounter them on such an occasion it’s as though the waters of the Sound have literally come alive. They can often be observed playfully harassing other larger marine mammals the likes of Humpback Whales and resident Killer Whales, also in the ‘hood during summer and autumn. The dolphins somehow know the difference between the resident fish-eating orcas and the transient orcas that will feed on dolphins and seals. An important distinction! More recently they’ve been showing up in the Strait of Georgia and Howe Sound near Vancouver. In different locales on the coast archaeologists have found their bones while searching through ancient ‘middens’ of long ago first nations people, evidence that they have inhabited these waters for generations, most likely millennia.

Photograph taken in Blackfish Sound off northern Vancouver Island, British Columbia, using a Canon EOS 1n with the Canon EF 70-200mm f2.8L lens set at about 70mm.  Exposure f8 at about 1/1000 of a second at on Fuji Provia film pushed to ISO 200.
Photo: © Dale Sanders – www.DaleSanders.info

Diving Under the Dock of the Bay

Words and Photography by Tiare Boyes  Docks are easily overlooked historical markers, reflecting the individual communities that have used them. They have provided an essential link between land and …

Words and Photo By Maxwel Hohn One of the most abundant fishes in BC’s coastal waters, Pacific herring are a keystone species for the marine food web and support a …