I was blind to the possibilities…and all the time it was staring me in the face. Every few circuits around the sun, some well-meaning public-relations maven sends out a press-release notifying the dive industry of yet another innovative technology or wonderfully-conceived piece of dive kit that will “Change the Way We Dive”.

But the reality is that very few things truly change the way we dive. In the vast majority of cases, when innovative technologies and clever bits of dive gear meet the every-day reality of scuba diving, there’s a little blip, a ripple or two, and then nothing.

As a consumer community, we seem to resist change—at least radical change. A diver from the 1970s magically transported to the dive platform of a liveabord today would recognize most of what was going on. Of course, some things have improved—anything to do with underwater imaging and lighting for example—but for the most part and for most of us, the basics are still the basics.

It’s not that the dive industry comes up with lots of bad ideas. Nope, some of the no-gos were decent concepts on the drawing board (recreational rebreathers for example). They just didn’t have the drive to break down consumer hesitation and become truly mainstream and radically change the way the world dives.

I’ve avoided diving full-face masks (FFM) for decades. No, hang on, that’s not really correct. I have many, many hours logged wearing a surface-supplied AGA mask with duplex communications for light commercial work, but apart from that, I have been dismissive of any brand of FFM for personal recreational or technical diving.

I’ve had buddies offer me a toasty-warm FFM when diving rebreathers in frigid sub-arctic water, but I opted instead for a traditional BOV and my trusty Scubapro frameless…and total loss of all feeling from forehead to chin.

I’ve turned my nose up at a full-face mask for wreck surveying and had jellyfish attached to my face like something out of an Alien movie. I’ve even poo-pooed a good friend’s suggestion to a gaggle of interested onlookers that they try FFMs for everyday Great Lakes diving.

Perhaps my opinion, often hasty and dogmatic, was wrong-headed. I think differently now. 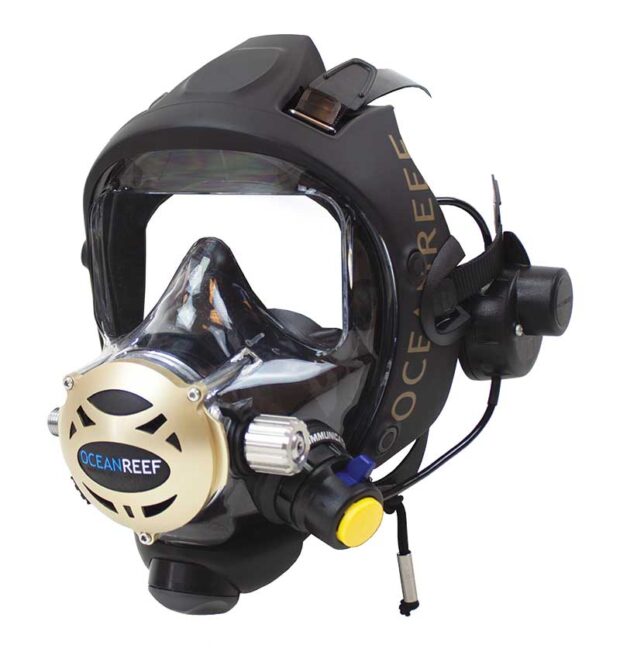 A change of mind…

The change of mind began with a conversation with Craig Mainprize. What he described was NOT an idea totally out of left field, something radically different to the status quo… just an innovative use of an existing (and recently refined) technology. Something I had never considered.

Simply put, an instructor wearing a FFM with an internal mike, connected to her students, each of whom has ‘headphones’ and a regular [half] mask. Imagine, one-way communications in real time. This makes directing skills sessions in confined water way more productive than printed slates, a scribbled suggestion in a set of wetnotes, or even the most expressive of hand signals.

Craig is a U.K. diver and instructor-trainer who works closely with the Ocean Reef company, and he wrote—among other things—the FFM program for RAID. No surprise perhaps, he is a champion for the use of FFMs during confined water diver training.

“The students,” he explained, “are not isolated: they feel connected to their instructor. They know exactly what their instructor needs them to do, and their instructor is able to give immediate feedback on their performance, including any adjustments and redirects.” He referenced experiences with basic open water students but added, “It’s a system that works at every level.”

That got me thinking about past pool sessions with sidemount students: no comms and no FFMs. Me trying to explain why I was pulling and tugging on my students’ kit and turning them sideways to get at clips and making stick drawings in a vain attempt to illustrate the finer points of trim and buoyancy.

I long ago moved away from teaching open-water and have almost entirely ceased teaching student-level programs; however, my agency job keeps me pretty well connected with the vagaries of entry level scuba instruction. And honestly, I cannot think of one single piece of kit that has the potential to have a more instant and positive effect on that process than what Mainprize described: a FFM for the instructor and one-way comms. for students.

By now there’s a chance that you’re saying to yourself, what’s the big deal…my open-water instructor had a FFM and comms. Well, you were lucky. Apart from Craig’s situation, I’ve seen zero instances of this type of teaching going on. I’d like to see more.

Which brings us to a question: What’s standing in the way of an agency (or an organization such as the RSTC) building into their standards the requirement to have in-water, one-way communications between the instructor and her students?

The answer is nothing, and lots of things. And now is not the time, and this is probably not the place for that discussion. However, what a great idea. Imagine the sales pitch: “Your instructor will be able to talk you through any difficulties, right there in the pool, while you are in the water!”

I honestly think the effectiveness of those first few hours of in-water instruction would be multiplied ten-fold if the industry adopted the FFM and headphones system. It would result in better open-water divers—actually, ALL levels of diver, up to and including cave divers. In effect any course that requires in-water skills development, and I think that covers most of the curriculum.

Traditionally, instruction time is often eaten up by re-briefing students on skills and surface-coaching them to correct small mistakes. Bobbing up and down in the pool to exchange a few words of encouragement and guidance is time-consuming, tiring, and a pain in the rear. How much better to be able to explain exactly and in detail what the student needs to fine-tune in order to nail a skill perfectly. Brilliant!

Of course, there is a potential downside. Imagine being a student of an instructor who fancies himself as a singer. Or a budding poet who recites Haiku about mask removal and replacement.

Text and Photography by Jill Heinerth Originally published in Volume 40, issue 7. Click here to subscribe. Pioneering Scuba diver Marjorie Bank never made it to my age. She died prematurely, …

Can you benefit from a drysuit cert card…?

Words by Steve Lewis I can’t recall what the original meeting was about. Probably something to do with training schedules or core standards or perhaps what flavour wings we’d order …

Lionfish – from predator to pendant

Text by Ian Stalker Lionfish that venture into Dominica waters may end up on a journey that transforms them from predators to prey to pendants. Lionfish are native to …